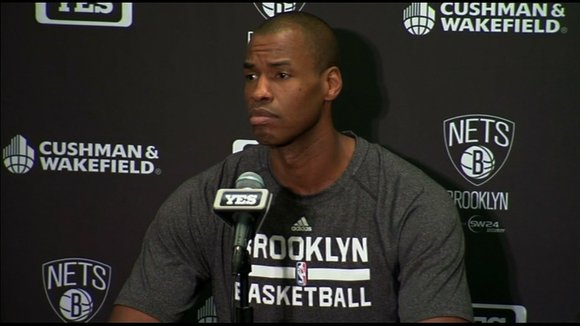 Jason Collins became the first openly gay man in the NBA when he signed a 10-day contract with the Brooklyn Nets on Sunday, February 24, 2014.

Jason Collins became the first openly gay man in the NBA when he signed a 10-day contract with the Brooklyn Nets on Sunday.

Collins, who lives in Los Angeles, was in uniform for the Nets' game against the Los Angeles Lakers Sunday night, first entering the action with 10:28 left in the second quarter and receiving a round of applause from the L.A. crowd at the Staples Center.

Brooklyn won the game 108-102 and Collins played a total of 11 minutes, not scoring any points but pulling down two rebounds and making one steal.

When Collins took the court, he became the first openly gay athlete in any of the major American team sports--baseball, football, basketball and hockey.

But in a post-game interview, Collins talked like a jock, not a history maker.

"It felt fun," Collins said. "It felt good to get back out there on the court."

"Jason told us that his goal was to earn another contract with an NBA team. Today, I want to commend him on achieving his goal," said NBA Commissioner Adam Silver. "I know everyone in the NBA family is excited for him and proud that our league fosters an inclusive and respectful environment."

Last year, the center, who was a free agent at the time, made the disclosure about his sexuality in an April column that appeared in Sports Illustrated magazine.

"I didn't set out to be the first openly gay athlete playing in a major American team sport. But since I am, I'm happy to start the conversation. I wish I wasn't the kid in the classroom raising his hand and saying, 'I'm different.' If I had my way, someone else would have already done this. Nobody has, which is why I'm raising my hand," he wrote.

Collins, 35, is a big, end-of-bench bruiser who can harangue opposing centers. Over 12 seasons, he has a career average of 3.6 points per game, and he hasn't averaged more than 2 points a games since his 2006-07 season as a Net when they were located in New Jersey.

Collins received a congratulatory tweet from Michael Sam, the all-American football player from the University of Missouri football who recently came out. Sam tweeted, "Congratulations to my friend @jasoncollins34 - excited to see you do work out there #Brooklyn."

Collins said he didn't expect to create such media stir in the coming games.

"There's only so many questions you guys can ask," he said.