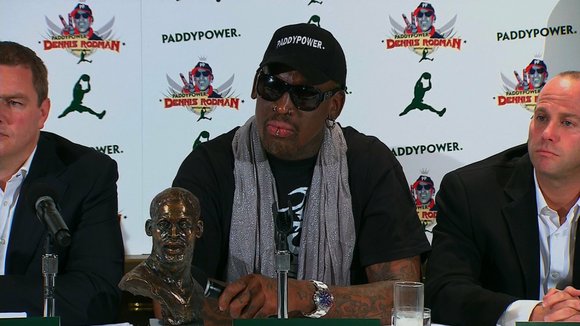 Former NBA star Dennis Rodman announced Monday that he will be working with Paddy Power, an online betting company, on a "basketball diplomacy" event involving players from North Korea.

Rodman met and coached the North Korean team on his most recent trip. But Cho Sung-Won, a South Korean basketball player who played against North Korea in 1999, said Rodman should not underestimate the side:

"The North Koreans were quite strong, well-built and tall as well," he said. "They were very determined not to lose against South Korea. It was a friendly match, but I was a bit intimidated."

"I don't know Dennis Rodman personally, but he is quite peculiar and does unexpected things," he said.

"I think he went to North Korea as a publicity stunt," Cho said. "On the other hand, North Korea plays some high-quality basketball, so they could learn from his experience."

South Korean table tennis player Hyun Jung-Wha, who was part of a joint Korean team that took part in the 1991 World Championships, praised Rodman's bid to break the ice with Pyongyang.

"What Dennis Rodman is doing now is personal, but I think he's brave for doing it," she told CNN.

"I believe sports definitely can help diplomacy," Hyun said. "Sportsmanship is pure, and I think diplomatic results can come out through sports."

But the U.S. government appears to be unconvinced.

"I know it's amusing or maybe interesting to talk about Dennis Rodman, but I actually think the focus really should be on the brutality of the North Korean regime he's going to meet with," Marie Harf, a State Department spokeswoman, said last month at the time of Rodman's previous trip.