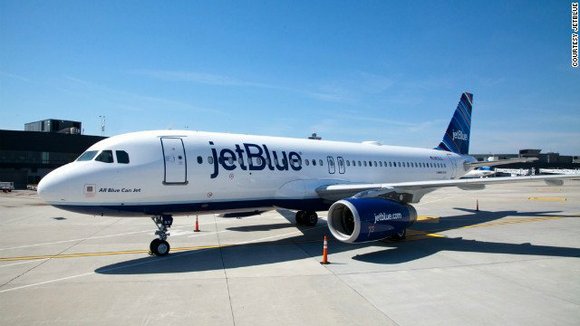 By Katia Hetter and Rene Marsh

Flying JetBlue Airways? You might not be on Monday or Tuesday if your travel includes Boston Logan International Airport or the three New York City-area airports.

On its blog, the airline said its plan would allow "for 17 hours of rest for crews, and time for (JetBlue) Tech Ops to service the aircraft."

As a result, some customers "aren't seeing available seats for nearly a week." And with its call centers handling high volume because of so many canceled flights, the airline recommends rebooking travel or requesting a refund online.

While claiming the airline was prepared for the new rules that increase rest requirements for pilots, scheduling pilots and crews is a "delicate" operation under normal circumstances, wrote Young, via e-mail. "Delays or cancellations disrupt those handoffs placing crews or planes 'out of position' for their flights."

"In the midst of us repairing those schedules disrupted by this week's winter storms, we're facing an additional challenge as new FAA rules went into effect for crew rest," she wrote. "These rules further impact our ability to operate an already disrupted schedule, causing our pilots to 'time out' even sooner. As a result, additional cancellations are likely to occur as we work to reset the operation."

The FAA announced the rule changes in December 2011. Pilot fatigue became a top priority in 2009 for the Department of Transportation, which oversees the FAA, after the February 2009 crash of Colgan Air Flight 3407 near Buffalo, New York. The rules went into effect Saturday.

While other U.S. airlines are delaying and canceling flights because of severe weather patterns, no other major U.S. airline contacted by CNN cited the new rules as a cause.

An airline pilots union said the airlines had sufficient time to adjust to the new FAA work rules.

"They had two years to anticipate this (work hour rule) and to adjust accordingly," said Sean Cassidy, vice president of the Air Line Pilots Association. "So I think it's overly simplistic to suggest that they could ascribe this disruption -- which happens to coincide with this major, major winter snowstorm -- and just hang it all on that rule-making change."

While the new pilot rest rules may be one of the many things that have disrupted air travel this week, ThePointsGuy.com's Brian Kelly says the airlines are looking to blame others for not hiring enough pilots to withstand disruptions to their schedules.

"The rules are necessary for passenger safety, (and) the airlines have had years to prepare," he said.

At the end of the day, "the airlines really can't withstand irregular events like these," said Kelly. "They have really bad emergency management plans in place."

CNN's Mike Ahlers and Aaron Cooper contributed to this story.