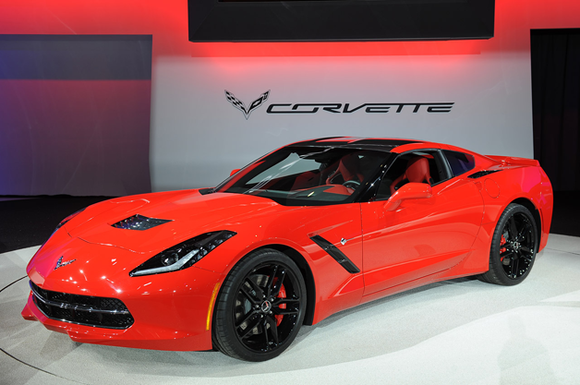 The Chevrolet Corvette Stingray has won Car of the Year honors at the Detroit auto show, while the Chevrolet Silverado has taken the show's Truck of the Year award. Both cars are made by General Motors.

The awards, announced Monday, are another sign of a comeback for the automaker. This is the first time GM has swept the awards since 2007, when the Saturn Aura and Chevrolet Silverado won. The last sweep of both awards was in 2010 when the Ford Transit Connect and Ford Fusion Hybrid won

For car sales, the importance of awards like these has grown. These two awards in particular, chosen by a panel of 48 auto critics, are among the most influential.

The 2014 Corvette Stingray has a higher-quality interior than past models and, with its 455 horsepower V8, it has better performance than any base-Corvette before it. It also has better fuel economy and a price tag that, at $51,000 to start, is far lower than other cars with similar capabilities.

The Chevrolet Silverado is an all-new truck for GM in a hotly competive full-size truck market. One of the biggest selling points, besides the truck's improved ride and interior quality, is its fuel economy. A base V8-powered 2014 Silverado gets an EPA-estimated 19 miles per gallon overall. Not only is that better than last year's Silverado it's also better than the Ford F-150 powered by the heavily marketed EcoBoost V6.

General Motor dominated the list of finalists, taking two of the three spots for car of the year and one out of three for the truck category. The other cars on the list were the Cadillac CTS and the Mazda3. The other trucks were the Acura MDX and the Jeep Cherokee.