Back by Popular Demand! The Peking Acrobats Return to Houston for One Night Only, Presented by Society for the Performing Arts 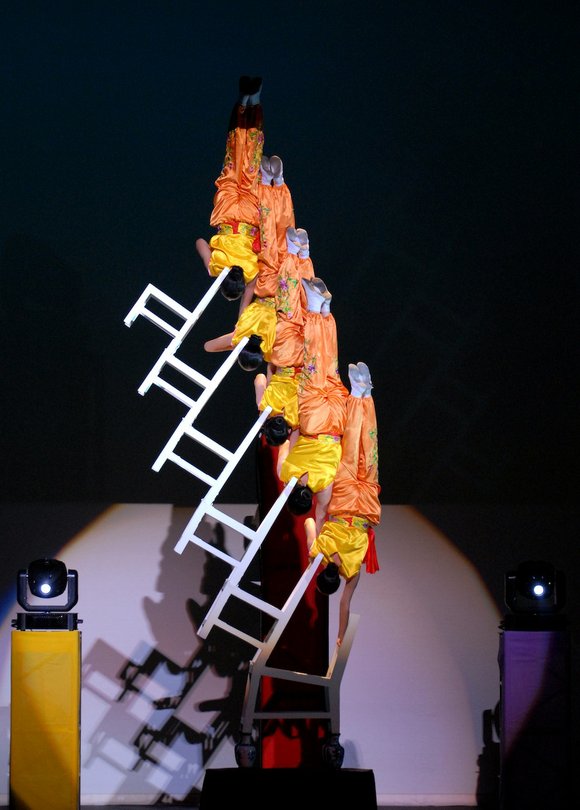 THE PEKING ACROBATS®, a troupe of China’s most gifted tumblers, will perform in Houston Friday, Feb. 7, 2014, at 7:30 p.m. in Jones Hall, presented by Society for the Performing Arts.

THE PEKING ACROBATS®, a troupe of China’s most gifted tumblers, contortionists, jugglers, cyclists and gymnasts, complemented by live musicians playing traditional Chinese instruments, will bring their 2,000-year-old tradition of acrobatics back to Houston Friday, Feb. 7, 2014, at 7:30 p.m. in Jones Hall, presented by Society for the Performing Arts.

This season marks the 28th North American tour for THE PEKING ACROBATS. Audience members will witness acrobatic traditions and amazing feats that have been given such names as “Let the Spinning Plates Spin,” “Colorful Contortion,” “Daring Diablos,” “The Bull and the Tiger,” “Pagoda of Chairs” and more!

and celebrity-studded TV Specials including appearances on “The Wayne Brady Show,” as well as NBC’s “Ring in the New Year Holiday Special,” Nickelodeon’s “Unfabulous” and “Ellen’s Really Big Show,” hosted by Ellen DeGeneres. THE PEKING ACROBATS set the world record for the Human Chair Stack on FOX’s “Guinness Book Primetime” where they astounded television audiences with their bravery and dexterity as they balanced six people precariously atop six chairs, 21 feet up in the air, without safety lines!

A member from THE PEKING ACROBATS has appeared on the silver screen in director Steven Soderbergh’s hit film Ocean’s 11, alongside Hollywood’s elite including Julia Roberts, Brad Pitt and George Clooney. Qin Shaobo appeared in the first installment, followed by the film’s two blockbuster sequels, Ocean’s 12 and Ocean’s 13. THE PEKING ACROBATS were the featured performers at the star-studded Hollywood Premiere of Ocean’s 13 in June 2007.

The history of Chinese acrobats goes as far back as the Ch’in Dynasty (221-207 B.C.). According to Fu Qifent, author Chinese Acrobatics through the Ages, acrobatics originated from the people’s daily life, drawing from their experiences in work, war and sacrificial rites. It was believed that practicing acrobatics could steal peoples’ will and increase their physical strength and the accuracy of their movements.

In China today, professional acrobatic troupes have many outlets for displaying their talents. Some appear on Chinese television shows as the broadcast industry in China has expanded to include several television channels featuring diverse programming. Others have formed joint

ventures with theme parks as an economically thriving China has fostered growth of its own family entertainment industry.

Since making their fall 2003 debut at the Hollywood Bowl’s Fireworks Season Finale, The Peking Acrobats have gone on to perform with some of the most prestigious symphony orchestras in North America including the Atlanta, Chicago, San Francisco and San Diego Symphony Orchestras; the Ravinia Festival Orchestra featuring members of the Chicago Symphony Orchestra; the Cincinnati Pops Orchestra; and the Buffalo Philharmonic Orchestra.

About Society for the Performing Arts

Founded in 1966, Society for the Performing Arts (SPA) is the largest independent non-profit presenting organization in the Southwest. Since its inception, SPA has sponsored more than 1,000 performances of the world’s finest music, dance and theater events, in adherence to the belief that the arts are fundamental to the overall enrichment and quality of life within the community. In addition to presenting artists, SPA seeks to provide a variety of learning experiences for adults and children through master classes, lectures and special student performances, as well as build relationships between the performing arts and other interests within the greater Houston area and throughout the state of Texas.