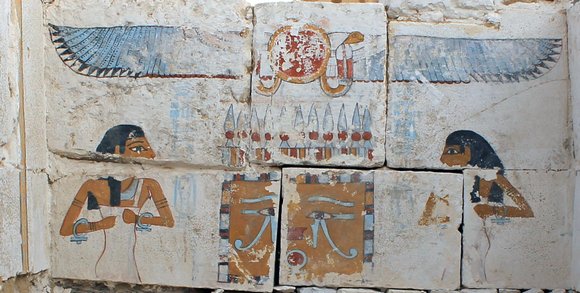 A newly found pharaoh's tomb in Egypt has historians scrambling to rewrite the chronicles of the ancient kings of the Nile.

Researchers with the University of Pennsylvania Museum of Archaeology recently discovered intricate and vibrantly colored pictures in the tombs of Abydos in the Egyptian desert, and what they read in the pictographs astounded them.

The team leader found the name of a previously unknown pharaoh who ruled the area 3,600 years ago, and the first proof of the suspected but shadowy Abydos Dynasty.

Josef Wegner, working with the Egyptian Supreme Council of Antiquities, discovered a previously looted tomb that unusually still had its pictures and writing in tact. The pharaoh's name is Woseribre Senebkay, described as the "king of upper and lower Egypt."

"It's exciting to find not just the tomb of one previously unknown pharaoh, but the necropolis of an entire forgotten dynasty," Wegner said in a statement from the Penn Museum, where he is associate curator in the Egypt Section.

Tomb raiders had looted the chambers of any valuable gold and left the bones of the pharaoh's mummy scattered about. That gave the team the opportunity to reassemble most of the body, along with his funeral mask.

It turns out Woseribre Senebkay was 5 feet, 9 inches tall and died some time in his mid-40s, the team determined.

The discovery shows that during a fractured period of time around 1600 B.C. during which the north and south of the Nile were split into rival kingdoms, there was a middle kingdom that may have survived for several generations.

Wegner suspects there will be much more evidence to uncover at the sprawling site buried under the hot Egyptian sand.

"Continued work in the royal tombs of the Abydos Dynasty promises to shed new light on the political history and society of an important but poorly understood era of Ancient Egypt," said Wegner.