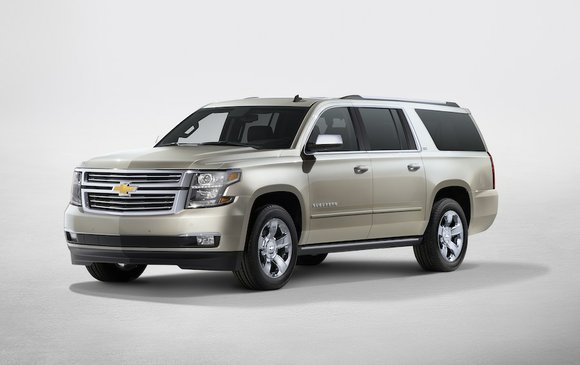 Chevrolet today introduced the 2015 Tahoe and Suburban – all-new versions of the industry’s best-selling duo of full-size SUVs. They offer more functionality, greater refinement, new safety features and an increased range of advanced technologies to appeal to two distinct customer groups who want the unique combination of features only Tahoe and Suburban provide.

“There are several new features and enhancements at the core of the all-new 2015 Suburban and Tahoe that will extend the legacy Chevrolet has built as the segment leader,” said Tim Mahoney, Chevrolet global chief marketing officer. “Customers will experience greater refinement, efficiency and safety with the same capability that has made Chevrolet the go-to brand for full-size SUVs.”

With more than 117,000 sold in 2012 and sales up more than 16 percent for the first six months of 2013 over last year. Chevrolet’s full-size SUVs continue to play an important role in the brand’s success and General Motors’ profitability. Introduced in 1935, the Suburban is the segment’s founder and the industry’s oldest continuously available nameplate, while Tahoe is the segment’s sales leader.

“The Chevrolet Tahoe and Suburban will continue to be dominant forces in the marketplace and provide great value for our customers, Chevrolet and General Motors," said Dan Ammann, GM executive vice president and CFO. "This is an important and profitable segment and we have set the bar high to ensure we provide our customers with great quality and performance they expect and deserve."

The all-new 2015 Suburban represents the 80th anniversary and 12th generation of the original SUV. This generation has been designed for today’s active families needing space for everyone and everything. Suburban continues to offer legendary roominess, unmatched functionality, connectivity and first-class amenities.

New functionality and technology features found on both vehicles for 2015 include: