Super Bowl: Temperature up. Prices down. Security tight. Game on! 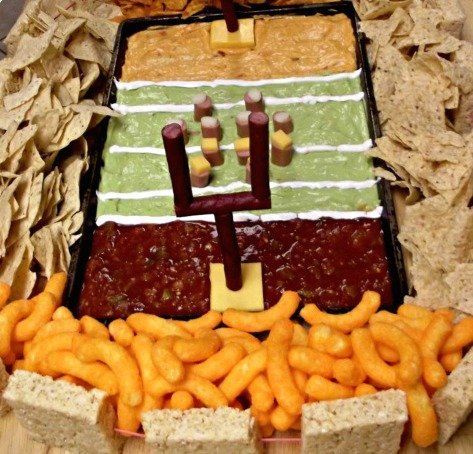 A snack worthy of football and party lovers alike. This expansive snack stadium is a surprisingly easy way to impress SUPER BOWL® party-goers.

(CNN) -- This is not your typical Super Bowl Sunday.

There are things that are down. The temperature, for one. Ticket prices, in some cases, are another.

A few things are up. The cost of the ads many people will be tuning in for -- a record $4.5 million.

The security presence, even by Super Bowl standards, will be big.

So how about some good news?

Weather forecasters say that by game time -- note to party hosts, 6:30 p.m. ET --- a clipper system will have moved through New Jersey, leaving just a few inches of new snow behind in East Rutherford. Temperatures will be in the mid-30s at kickoff.

That's not as nice as past Super Bowl sites like Miami (high of 79 on Sunday), Tampa (81) or next year's host city, Glendale, Arizona (73), but compared with what might have happened this crazy winter, it must be the NFL's best imagined scenario.

Not that they haven't planned for other possibilities.

"We feel like we're prepared for every alternative," NFL Commissioner Roger Goodell told ESPN's "Mike & Mike in the Morning" on Monday. That included moving the time of the game if league officials felt like the safety of the fans was in jeopardy. "We're working with all the officials here. We're pretty comfortable we'll be playing at 6:30 on Sunday night."

Goodell has said he will sit out in the stands, just as the late Pete Rozelle did at Super Bowl VI when it was 39 degrees for the kickoff in New Orleans at Tulane Stadium.

Security by land, sea and air

Huge sporting events like the Olympics and Super Bowl always draw large security forces as did prior events at MetLife Stadium, site of Sunday's game. Lt. Col Ed Cetnar of the New Jersey State Police told CNN this is a different ballgame.

There will be more than 700 troopers in and around the stadium complex, he said. But they won't be the only people guarding the game.

"There's eyes all over the place, whether it's state, local, federal or county assets there," he told CNN's Alexandra Field.

That also includes 3,000 private security guards on site. And extra security for mass transit options because there will only be 12,000 parking spots at the game for 80,000 fans and 5,000 media members.

"There is a template within the NFL and there are certain things that we follow with the NFL. But we have to use our own template because every city is different," he told CNN. "Obviously it's different than other Super Bowls because of our proximity to New York City."

The proximity of the stadium to waterways and railways will mean extra Coast Guard boats on game day and more planes from federal agencies in the sky equipped with infrared and night-vision systems.