More travel delays in Southeast as airports dig out 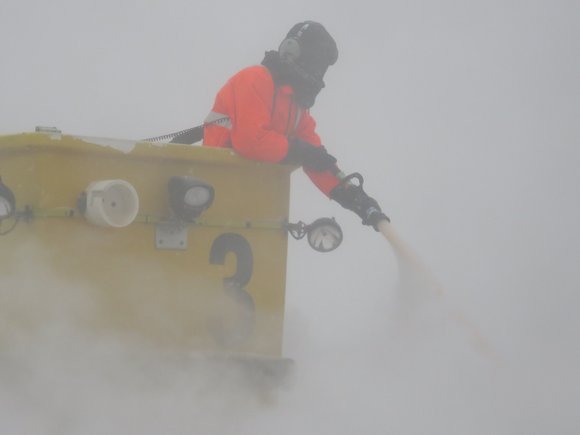 Snow falling at the Atlanta Hartsfield-Jackson airport on Tuesday, January 28, 2014.

(CNN) -- Nicole Herbert of Flemington, New Jersey, sat near Gate E66 at the Tampa International Airport waiting to see if her flight to Atlanta would take off.

It was set to depart at 12:15 p.m. Wednesday, but none of the flights from Tampa to Atlanta had taken off by about 11:30 a.m. "The pilot of our flight was supposed to fly in on a flight that was canceled," Herbert said. "It's life and you have to be safe and you just have to learn to go with it."

After flying to Atlanta, her plan is to catch a flight home to Philadelphia. "I have a lot of empathy for the struggles of people out there," Herbert said, referring to motorists stranded on Atlanta-area highways for hours in Tuesday's storm. "I have my water, and I'm comfy and cozy here in the airport."

Tampa and other airports across the Southeastern United States are recovering from the impact of the snowfall, assuring a long day Wednesday of flight cancellations and delays for frustrated travelers.

Airlines have already canceled 1,583 flights as of about 11 a.m. ET Wednesday, according to Mark Duell, FlightAware.com's vice president of operations. That follows 3,261 flight cancellations on Tuesday.

The airport most affected was Hartsfield-Jackson Atlanta International, the world's busiest, with some 29% of flights canceled, Duell wrote via e-mail. AirTran Airways (46% of schedule canceled) and Delta Air Lines (18% of schedule canceled), which are based in Atlanta, felt the impact the most among airlines.

"This spate of winter weather has hit a lot of airports that usually don't face winter weather and are less prepared for it," Duell said via e-mail. "An airport like Houston IAH (George Bush Intercontinental Airport) has more daily flights than Detroit, but less than a third as many de-icing trucks, so when every flight needs de-icing they see a massive slowdown in departures and the airlines pre-emptively cancel flights."

With roads treacherous across the Southeast, airports are struggling to return to normal operations.

Even at airports whose personnel can clear the runways, as they have in Atlanta, travelers may not able to navigate the roads to get to the airport or leave the airport to get home.

For Southwest Airlines, which also owns the AirTran brand, Atlanta and Houston are important hubs. And both airports have been hard hit by this winter weather.

"Our people in Atlanta, in particular, are facing a challenging day," said Southwest spokesman Brad Hawkins via e-mail. "We are evaluating many different facets: road conditions, airfield and airport, runway/taxiway conditions. What you're seeing there in Atlanta is a continuing operation but an extremely slow operation, resulting in just a few departures every hour."

Delta reported about 600 system cancellations as of midday Wednesday, on top of 1,200 Tuesday, and it's facing challenges getting employees to work, said airline spokesman Morgan Durrant.

"Last night, we did allow airport employees to sleep aboard aircraft parked at gates and we flew an extra section (unscheduled flight) full of pilots and flight attendants to Louisville so they could be afforded rest in hotel rooms," Durrant said via e-mail. "They will return to ATL early this afternoon. This group was scheduled to have hotel stays near ATL as part of their regularly scheduled trips."

American Airlines reported 200 cancellations Wednesday so far, on top of about 475 cancellations the day before due to weather, an airline representative said. "The biggest impact today is along the Gulf Coast," the representative wrote. "Chicago O'Hare is also a challenge due to extremely cold temperatures."

U.S. Airways, which merged with American but still operates separate flights, canceled about 230 flights so far Wednesday, mostly due to weather, on top of 300 cancellations Tuesday, said spokesman Davien Anderson.

Its Charlotte, North Carolina, hub was hit hard. "Our employees are working hard to get operations back to normal in Charlotte," Anderson via e-mail. "We hope to return to normal operations by tomorrow."

And if that wasn't bad enough news in the Southeast, Los Angeles International Airport was reporting delays due to weather. Via Twitter, the Los Angeles airport warned, "A ground stop for arriving flights is in effect at #LAX due to heavy fog & low visibility."