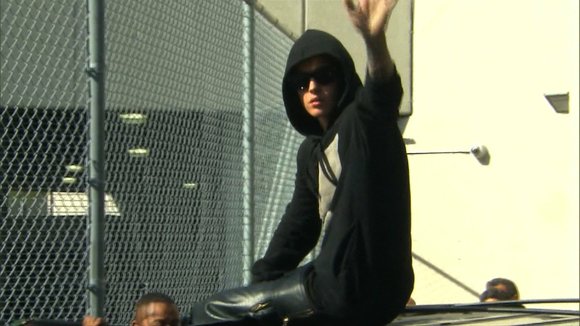 Justin Bieber waves to fans after being released from a Miami, Florida jail Thursday, January 23, 2014.

Justin Bieber was under the influence of alcohol, pot and Xanax when police stopped him for drag racing in Miami Beach last week, police documents allege.

"Yeah, we were smoking all night at the studio," the singer told a police officer who told he "reeked of marijuana" as he rode in a patrol car, according to documents released Thursday.

Bieber was "excited," "talkative," "insulting" and "cocky" and "used profanity," according to a intoxication evaluation conducted by Miami Beach police.

His speech was mumbled, his pupils dilated, his face flushed and his eyes bloodshot, the assessment said.

The lab test results and details of Bieber's sobriety tests were released just hours after the 19-year-old singer was booked on an assault charge in Canada, accused of hitting his limousine driver in Toronto a month ago.

Earlier Wednesday, Bieber's lawyer entered a "not guilty" plea to the Florida charges of DUI, resisting arrest and driving with an expired license, according to court records.

The prospect of a third criminal arrest for Bieber hangs on a decision expected as soon as next week, after detectives investigating an alleged egg attack on his California neighbor meet again with a Los Angeles prosecutor.

Bieber told police in Miami Beach that he had taken "medications for anxiety" that night but that he did not know what it was or whether he had a prescription for it. "Well, my mom takes care of all that stuff for me," the police report quoted him as saying.

The preliminary toxicology report on Bieber's urine sample said it tested positive for "metabolite of THC," which indicates marijuana use, and alprazolam, the generic name for the prescription sedative Xanax.

At the police station, Bieber failed a series of sobriety tests, including "horizontal gaze," "Romberg balance," "walk and turn," "finger to nose" and "one-leg stand" tests, the police report said.

When Bieber was asked to estimate when 30 seconds passed, he failed by thinking a half-minute was over in 17 seconds, the report said.

He had "great difficulty" completing the Breathalyzer test, the officer wrote. He "continously forgot basic instructions."

Bieber told the officer "that he was blowing as hard as he could, and told me to look at how red his face was," he wrote. "He advised he was blowing into the hose like he blows into his trumpet."

When he was finally successful, he blew .011 and .014 in two Breathalyzer tests, the report said. Florida's legal limit for drivers under the drinking age of 21 is .02.

Bieber was briefly jailed in Miami Beach on January 23 after he was stopped by a police officer who said he was drag racing in a Lambourghini on a residential street.

Bieber arrived at a Toronto police station for booking Wednesday evening amid a chaotic scene as determined photographers, reporters, screaming fans and the curious converged around his SUV. About a dozen Toronto police officers shoved their way through the crowd to escort Bieber, getting him through the door only after a struggle.