Rodman in rehab: I'm not an ambassador to North Korea 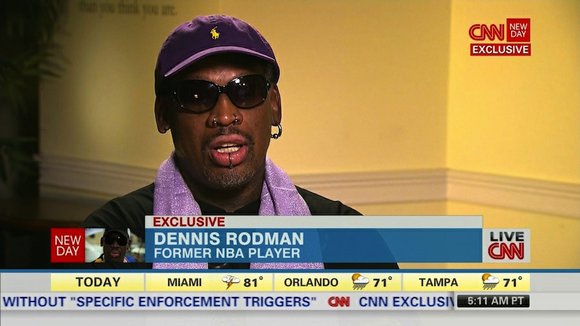 By Mariano Castillo and Steve Almasy

Dennis Rodman says he's not a diplomat, just a former NBA star fighting addiction and trying to be a better father.

But that hasn't kept him from becoming embroiled, even if unintentionally, in U.S.-North Korea relations.

His apparent chumminess with North Korea's leader has been controversial, as have previous proclamations that Kim Jong Un is a "nice guy."

Rodman said he simply does not know enough about the allegations of abuse and authoritarianism that Kim is reviled for.

"I keep telling people, I'm not there to be an ambassador to try to figure out why (is Kim) doing all these things? That's not my job," Rodman told CNN's Chris Cuomo on "New Day" Friday.

It was his first interview since entering an alcohol rehabilitation facility two weeks ago.

The former basketball player is probably the American with the most access to the North Korean leader, and many have been critical that he has not lobbied for the release of American prisoner Kenneth Bae from a labor camp.

Rodman says he didn't mean to insinuate during an earlier interview this month that he knew why Bae, a Korean-American, was being held in North Korea.

"To this day I still don't know what he did," Rodman said, even offering to take Bae's place if he could.

"I feel for (Bae's family). I feel for them deeply. ... I would do anything literally. This is Dennis Rodman talking. If they (North Korea) said, 'We'll take Dennis Rodman and we'll let Kenenth Bae go,' I'll say, 'You know what? I'll do that. ... Take me.'"

The North Korea topic was important, but Friday's interview was as much about Rodman's personal struggles with addiction.

But he said this is a great time for him to reflect publicly and put himself at peace with a "lot of stuff that has been going on" over the past 18 months.

"I think for me, the reason I drink is because I'm bored," he said.

"Am I an alcoholic? Absolutely," Rodman said.

"It wasn't about me being in the right mind," he said.

This month, the colorful basketball Hall of Famer, who won five NBA titles with the Detroit Pistons and Chicago Bulls, organized a team of former professional basketball stars to go to North Korea for a game that was played on Kim's birthday.

The players were criticized for traveling to the secretive state, a nation accused of human rights abuses. North Korea also has pursued a nuclear program, despite warnings from the United States and other Western powers.

Rodman said his actions in North Korea do not make him a bad person.

"I'm not a traitor," Rodman said. "My whole goal is to make people happy."

During the live interview, the former professional basketball player extended an invitation to take Cuomo to North Korea to meet its leader, and decide for himself what kind of person Kim is.

Fellow player Charles Smith defended the visit as a mission of basketball diplomacy, where sportsmen would share cultural ideas with each other.

While there -- in what was his fourth trip to North Korea -- Rodman spoke to Cuomo in an at-times heated interview. The sunglasses-wearing Rodman began yelling at the CNN anchor as he defended the team's visit.

"We do," responded Cuomo. "And we appreciate that and we wish them well with cultural exchange."

And Rodman also implied that Bae, held prisoner for 15 months by the regime, was guilty of a crime, but he did not specify what offense.

"I would love to speak on this," Rodman said, before abruptly switching topic to talk about how his fellow basketball players had left their families behind to come to North Korea for the exhibition game.

Bae, of Lynwood, Washington, was arrested in November 2012 in Rason, along North Korea's northeastern coast. The devout Christian and father of three operated a China-based company specializing in tours of North Korea, according to his family and freekennow.com, a website that friends set up to promote his release.

Rodman later apologized for his remarks about Bae. And his longtime agent, Darren Prince, said his client had fallen victim to stress and drinking.

"He is embarrassed, saddened and remorseful for the anger and hurt his words have caused," Prince said in announcing that Rodman was in rehab.