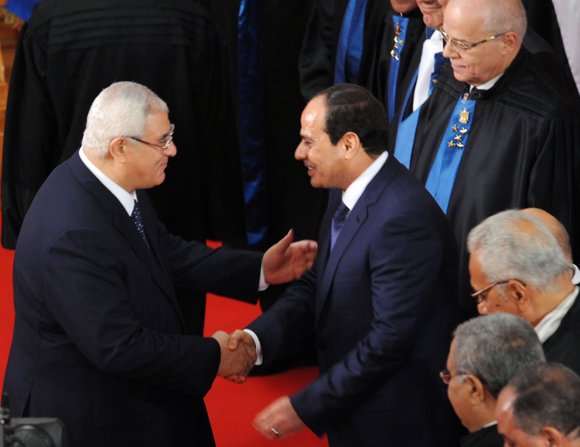 Here is a look at the life of Egyptian president Abdel Fattah el-Sisi.

Other Facts: After graduating from military academy in Egypt, el-Sisi began in the infantry corps and later rose to command a mechanized infantry division, then Egypt's northern military zone.

June 26, 2011 - El-Sisi pledges to Amnesty International that the Egyptian army will no longer subject female detainees to "virginity tests." Months earlier, el-Sisi had confirmed that forced "virginity tests" were performed on women arrested at the March 9 protests and defended the practice.

August 12, 2012 - President Mohamed Morsy appoints el-Sisi as minister of defense and commander-in-chief of the armed forces.

July 1, 2013 - After widespread demonstrations, el-Sisi delivers the Egyptian military's message that the country's civilian government has 48 hours to "meet the demands of the people" or the military will step in to restore order. The ultimatum is not considered the declaration of a coup.

July 3, 2013 - Egypt's military removes Mohamed Morsy from power and reportedly holds him under house arrest. In a televised speech to the nation, el-Sisi says that Morsy "did not achieve the goals of the people" and failed to meet the generals' demands that he share power with his opposition. El-Sisi also says that Adly Mansour will serve as interim president.

July 16, 2013 - In addition to retaining his positions as defense minister and leader of the armed forces, el-Sisi is also sworn-in as deputy prime minister.

January 2014 - Is promoted to field marshal.

March 26, 2014 - Resigns from his military post and declares his candidacy for president of Egypt.

May 5, 2014 - In a taped interview broadcast on Egyptian satellite networks, el-Sisi vows to finish off the Muslim Brotherhood if he's elected president.

June 3, 2014 - Officially declared the winner of the presidential election, with more than 96% of the vote.