'Tammy': A dream comedy? Not for critics 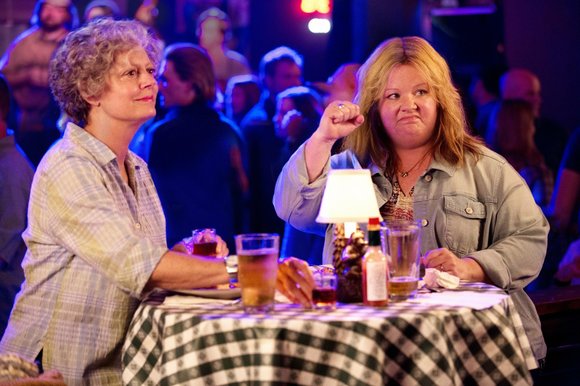 A road trip, Melissa McCarthy and a drunken Susan Sarandon. Sounds like a recipe for a summer blockbuster, right?

That's what McCarthy and her husband, Ben Falcone, are hoping to pull off with their July 2 comedy, "Tammy." The pair co-wrote and co-produced the feature about an unhinged woman who's suffered a job loss and an unfaithful husband in too short a time span. McCarthy stars as the titular troubled Tammy, while Falcone took a seat in the director's chair for the first time.

And according to the duo, they have a peculiar dream to thank for their inspiration.

"Apparently (Falcone) goes and has really strange dreams about alcoholic grandmothers, but it's working out great for us," McCarthy joked at the movie's June 30 premiere.

"I know it sounds a little bit creepy," Falcone added, "but I came downstairs and I just told Melissa, 'Would you want to do a road trip movie?' And "a mere seven years later," here they are, with "Tammy" having ridden McCarthy's reputation for perfectly executed physical comedy right to the top of this summer's "must-see" list.

The only nightmare in the realization of their literal dream comedy is that the critics aren't laughing. Variety's called it "a well-meaning personal project that never rises above the level of amiable mediocrity," and The San Francisco Chronicle wasn't any kinder.

"There's only one genuinely funny scene in 'Tammy,' and of course it's the first." Rather than a production team, the Chronicle continues, "Tammy" needed "an intervention."

IndieWire thought the marketing campaign's emphasis on just one scene -- you know the one, where she's robbing a fast-food restaurant of its pie -- was because if "anyone understood what the actual movie consisted of, they'd probably stay away in droves. ... 'Tammy' is a boring, unfunny road movie that limps along idly, consisting of a string of nonsensical set pieces and halfhearted stabs at character development that come across as off-putting and odd. As soon as our screening ended, a woman behind us sighed and said, 'That was uncomfortable.' We couldn't agree more."

The Hollywood Reporter doesn't expect "Tammy" to have a long ride through the summer, suspecting that McCarthy's fans will show up initially before the title fizzles out.

"The film progresses from merely unfunny to unconvincing to dull," THR reviews. "It's a waste of a good cast as well as a serious trip wire for McCarthy, who may know what's best for her talents but, on the evidence, needs a deft-handed outsider to make sure she's maximizing them."

No wonder Entertainment Weekly sympathetically acknowledges that "it's hard out here for a Tammy."

The movie's script is "lumpy" and the supporting actors "never quite get to tap into what they can do," EW observes, but at the very least, "even when the material falls short, (McCarthy's) never not worth watching."