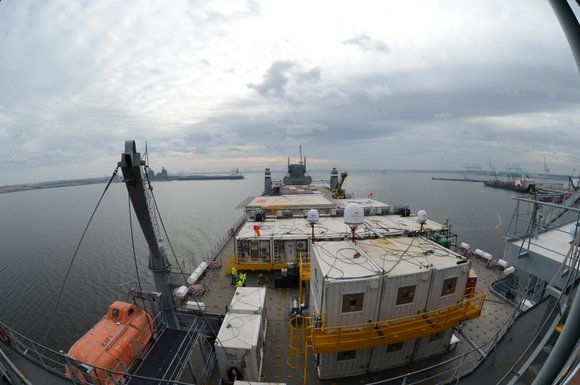 It's been a little over a year since President Barack Obama accused the Syrian government of crossing a "red line," with the use of poison gas against civilians. This week, the last of the country's declared chemical weapons stockpiles are sailing to their eventual demise.

On Wednesday, the transfer of the chemicals from a Danish ship to the U.S. government container ship, the Cape Ray, got under way at an Italian port, Gioia Tauro.

The transfer is expected to continue through the day, ending Wednesday night, the Italian Interior Ministry said. Pentagon spokesman Rear Adm. John Kirby said Tuesday that the process was expected to take two to three days.

Once the transfer is complete, the Cape Ray will sail out to international waters and destroy nearly half the total load of 1,300 metric tons (1,433 short tons,) the Pentagon said in a statement Tuesday.

It will take 60 days to neutralize the chemicals safely and cleanly, the Pentagon said.

The rest of the mustard gas and methylphosphonyl difluoride, a chemical used to make nerve agents sarin and soman, will be destroyed at plants in the United States and Europe.

The resulting hazardous waste will be further processed in Germany and Finland.

The chemical weapons left Syria on the Danish ship Ark Futura just over a week ago, bound for Italy.

It was a major milestone when the weapons left the Syrian port of Latakia, said Ahmet Uzumcu, the chief of the OPCW, the Organisation for the Prohibition of Chemical Weapons, which led the mission to remove and destroy the weapons.

"Never before has an entire arsenal of a category of weapons of mass destruction been removed from a country experiencing a state of internal armed conflict," he said.

But inspectors can't say for sure that some undeclared weapons aren't still lurking somewhere in the country.

Syria's civil war has dragged on since 2011, and in 2013 images surfaced of civilians who allegedly died from poison gas attacks.

The nonpartisan Doctors Without Borders then reported that three hospitals near Damascus treated more than 3,000 patients suffering "neurotoxic symptoms."

The United Nations firmed up the accusations after sending inspectors into the country.

The White House has stepped up U.S. military support to rebels fighting the forces of President Bashar al-Assad, though it stopped short of putting weapons in their hands.

The OPCW reported that Syrians were using torches and grinders to destroy or disable weapons such as missile warheads and aerial bombs.

Despite the apparent end to a chapter in the history of Syria's chemical weapons, on the ground in Syria, trauma and bloodshed continue.