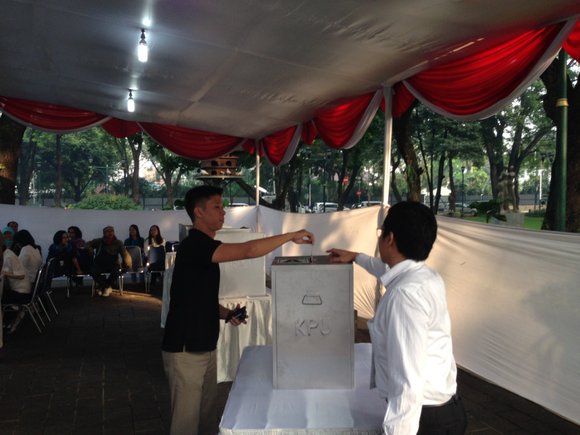 Millions of Indonesians cast their ballot for their next president in a neck-and-neck race between Joko "Jokowi" Widodo, a former furniture businessman who has drawn comparisons to U.S. President Barack Obama, and Prabowo Subianto, a well-connected former military man.

One survey group, Lingkaran Survei Indonesia, showed 53.3% for Widodo and 46.7% for Prabowo with 99% of its data, and another group, Center for Strategic International Studies reported 52% for Widodo over 48% for Prabowo, with 95% of its data. Another independent survey group, Saiful Mujani Research and Consulting indicated 52-53% for Jokowi over Prabowo's 46% with 99% of data.

Quick counts in Indonesia are usually accurate with a slim 1-2% margin of error, said Kevin Evans, a political analyst. Unlike previous Indonesian elections though, this race is a tight one.

"Officially it will take us a few weeks to know if we are the actual winner so it must be official," Prabowo told CNN.

"I am very confident, very confident," he said after voting. "You saw how enthusiastic the people are, how happy they are. Of course, this is my home village but most of the reports I get from all over Indonesia, we are doing very well."

Over 185 million eligible voters across 17,000 Indonesian islands were eligible to vote.

Both candidates have been dogged by allegations leading up to voting day for the world's most populous Muslim nation.

Earlier this year, Widodo had enjoyed double-digit lead in polls only to watch that advantage erode following smear campaigns suggesting that he is of Chinese descent, or even a Christian -- a deal breaker for many in this Muslim-majority nation. Prabowo, a career military man, had not been able shake off persistent questions about his human rights record.

Voters are looking for firm leadership that they haven't received under the current president, said Douglas Ramage, an analyst from Bower's Asia Group.

The next president will be inaugurated on October 20.

Yudhoyono leaves behind a slowing economy hampered by trade and budget deficits. The first and foremost issue -- like all elections -- is the economy.

Indonesia's economy has slowed to 5-6% growth, which the World Bank says is not enough to provide jobs for the 15 million Indonesians joining the work force.

"It has the people, it has the resources, it has favorable demographics, it has rapid urbanization and it has a rising middle class," said Ndiame Diop, the World Bank lead economist for Indonesia. "And it has very good macro-economic management. I think those are ingredients that really lift the country."