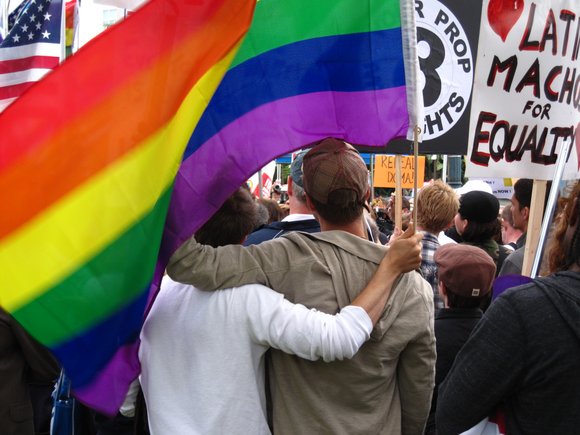 Here's some background information about same-sex marriage in the United States and worldwide.

Worldwide 16 other countries (and parts of Mexico) also have laws allowing same-sex marriage and domestic partnerships. Most of these are in Europe and South America.

December 3, 1996 - A Hawaiian state court ruling makes Hawaii the first state to recognize that gay and lesbian couples are entitled to the same privileges as heterosexual married couples. The ruling is stayed and appealed the next day.

July 14, 2004 - The U.S. Senate blocks a proposed constitutional amendment to ban same-sex marriage from moving forward in Congress. (48 votes out of 60 needed)

May 15, 2008 - The California Supreme Court rules that the state's ban on same-sex marriages is unconstitutional. The decision goes into effect on June 16th at 5:01 p.m.

March 23, 2009 - The Vermont state Senate votes 26 to 4 to legalize same-sex marriage. It goes before the state's House of Representatives on March 27. Vermont Governor Jim Douglas says he will veto a same-sex marriage bill if it comes across his desk.

April 7, 2009 - Vermont legalizes same sex marriages after both the state Senate and House of Representatives overturn a veto by Governor Jim Douglas. The Senate vote is 23-5, while the House vote is 100-49.

May 6, 2009 - Same-sex marriage becomes legal in Maine, as Gov. John Baldacci signs a bill less than an hour after the state legislature approves it.

May 26, 2009 - The California Supreme Court upholds the passage of Proposition 8, banning same-sex marriage. However, 18,000 such marriages performed before Proposition 8 will remain valid.

July 9, 2010 - Judge Joseph Tauro of Massachusetts rules that the 1996 Defense of Marriage Act is unconstitutional because it interferes with a state's right to define marriage.

February 16, 2011 - Hawaii's Senate passes a measure to legalize same-sex civil unions. Gov. Neil Abercrombie says that he will sign the bill, which will take effect January 1, 2012.

February 23, 2011 - The Obama Administration instructs the Justice Department to stop defending the constitutionality of the Defense of Marriage Act in court.

June 14, 2011 - U.S. District Court for the Northern District of California upholds a lower court ruling invalidating California's Proposition 8's ban on same-sex marriage as unconstitutional. The ruling had been challenged when the lower court's judge was found to be gay.

January 30, 2012 - Legislation to legalize same-sex marriage in the state of Washington passes a House committee vote and heads to the Senate. Governor Christine Gregoire is in favor of the bill.

February 7, 2012 - A three-judge panel with the 9th U.S. Circuit Court of Appeals in San Francisco rules that Proposition 8, the voter-approved same-sex marriage ban, violates the constitution.

February 13, 2012 - Same-sex marriage is signed into law in Washington by Governor Christine Gregoire.

February 17, 2012 - New Jersey Governor Chris Christie vetoes a bill legalizing same-sex marriage. New Jersey lawmakers have until the legislative session ends in January 2014 to override Christie's veto and will need a two-thirds majority in both houses to succeed.

February 23, 2012 - The Maryland Senate passes a bill to legalize same-sex marriage. The bill passed the Maryland House vote earlier in the month, and Governor O'Malley has promised to sign it into law. The law goes into effect in January 2013.

May 9, 2012 - Excerpts from an interview with ABC air in which President Barack Obama endorses same-sex marriage, the first such statement by a sitting president. He feels that the legal decision should be up to the states to determine.

May 31, 2012 - The 1st U.S. Circuit Court of Appeals in Boston rules that the Defense of Marriage Act, (DOMA), discriminates against gay couples.

June 5, 2012 - The 9th Circuit U.S. Court of Appeals in San Francisco denies a request to review an earlier court decision stating that California's Proposition 8 violates the Constitution. A stay on same-sex marriages in California remains in place until the issue is exhausted in the courts.

October 18, 2012 - The 2nd U.S. Circuit Court of Appeals rules that the Defense of Marriage Act, (DOMA), violates the Constitution's equal protection clause, deciding in favor of widow Edith Windsor, an 83-year-old lesbian who sued the federal government for charging her more than $363,000 in estate taxes after being denied the benefit of spousal deductions.

November 6, 2012 - Voters in Maryland, Washington and Maine pass referendums legalizing same-sex marriage. This is the first time same-sex marriage has been approved by a popular vote in the United States. Voters in Minnesota reject a ban on the issue.

December 7, 2012 - The U.S. Supreme Court announces it will hear two constitutional challenges to state and federal laws dealing with the recognition of gay and lesbian couples to legally wed. Oral arguments in the appeal are held in March 2013, with a ruling expected by late June.

January 1, 2013 - Maryland begins issuing marriage licenses to and performing ceremonies for same-sex couples as the new law goes into effect.

January 25, 2013 - The Rhode Island House of Representatives passes a bill legalizing same-sex marriage. It now goes before the state Senate for consideration.

February 14, 2013 - The Illinois Senate votes to legalize same-sex marriage. The bill now moves to the House for a vote.

May 2, 2013 - Rhode Island Gov. Lincoln Chafee signs a bill legalizing same-sex marriage after the state legislature approves the measure. It goes into effect in August 2013.

May 7, 2013 - Delaware legalizes same-sex marriage. It goes into effect in July.

May 14, 2013 - Minnesota Gov. Mark Dayton signs a bill giving same-sex couples the right to marry. The law goes into effect in August 2013.

June 26, 2013 - The Supreme Court rejects parts of the Defense of Marriage Act (DOMA) in a 5-4 decision, dismissing an appeal over same-sex marriage on jurisdictional grounds and ruling same-sex spouses legally married in a state may receive federal benefits. It also rules that private parties do not have "standing" to defend California's voter-approved ballot measure barring gay and lesbians couples from state-sanctioned wedlock. The ruling clears the way for same-sex marriages in California to resume.

August 29, 2013 - The U.S. Treasury Department rules that legally married same-sex couples will be treated as married for tax purposes, even if they live in a state that does not recognize same-sex marriage.

September 12, 2013 - A Commonwealth Court judge orders the Montgomery County, Pennsylvania Register of Wills, D. Bruce Hanes, to stop issuing marriage licenses to same-sex couples. Since July, Hanes has issued licenses to 174 couples, despite a 1996 Pennsylvania law defining marriage as between a man and a woman.

September 27, 2013 - A New Jersey state judge rules that same-sex couples must be permitted to marry in New Jersey starting October 21. The ruling says that the parallel label "civil unions," which the state already allows gay couples, is illegally preventing them from getting federal benefits.

October 12, 2013 - The New Jersey Supreme Court announces it will hear, in January, Garden State Equality v. Dow, to decide if New Jersey is violating the equal protection of the state's constitution by denying same-sex the right to marry.

November 20, 2013 - Illinois becomes the 16th state to legalize same-sex marriage when Governor Pat Quinn signs the Religious Freedom and Marriage Fairness Act into law. The law will go into effect on June 1, 2014.

November 27, 2013 - Pat Ewert and Venita Gray become the first same-sex couple to marry in Illinois. Gray's battle with cancer prompted the couple to seek help from a federal court to receive a license before the law goes into effect in June. Gray dies March 18, 2014.

January 6, 2014 - The Supreme Court temporarily blocks same-sex marriage in Utah, sending the matter back to an appeals court.

January 8, 2014 - State officials in Utah announce that the more than 1,000 same-sex marriages performed in the last three weeks will not be recognized.

January 14, 2014 - An Oklahoma federal court rules the state ban on same-sex marriage is, "an arbitrary, irrational exclusion of just one class of Oklahoma citizens from a governmental benefit." Anticipating an appeal, U.S. Senior District Judge Terence Kern puts in place a stay pending the outcome of the Utah appeal, so same-sex couples in Oklahoma cannot immediately marry.

February 10, 2014 - Attorney General Eric Holder issues a memo stating, "the (Justice) department will consider a marriage valid for purposes of the marital privilege if an individual is or was validly married in a jurisdiction authorized to sanction marriages, regardless of whether the marriage is or would have been recognized in the state where the married individuals reside or formerly resided, or where the civil or criminal action has been brought."

February 26, 2014 - U.S. District Judge Orlando Garcia strikes down Texas' ban on same-sex marriage, ruling it has no "rational relation to a legitimate government purpose." Garcia stayed enforcement of his decision pending appeal, meaning homosexual couples in Texas for the time being cannot get married.

March 14, 2014 - A federal preliminary injunction is ordered against Tennessee's ban on recognizing same-sex marriages from other states.

May 13, 2014 - U.S. Magistrate Judge Candy Wagahoff Dale rules that the Idaho ban on gay marriage is unconstitutional and fails to live up to the U.S. Constitution's 14th Amendment that guarantee no "state deprive any person of life, liberty, or property, without due process of law; nor deny to any person within its jurisdiction the equal protection of the laws." The order is set to take effect May 16, 2014. An appeal is filed.

May 15, 2014 - The U.S. Ninth Circuit Court of Appeals responds to the appeal from Idaho. It issues a temporary stay against same-sex marriage in Idaho, which was to go into effect May 16, 2014.

May 16, 2014 - Arkansas state Supreme Court issues an emergency stay as its judges consider the appeal to the state judge's ruling for same-sex marriage. This leaves the legal status of more than 400 gay and lesbian couples who got marriage licenses in limbo.

June 6, 2014 - A Wisconsin federal judge strikes down the state's same-sex marriage ban. The judge does not immediately issue a stay of her ruling or state whether it takes effect right away. However, Wisconsin Attorney General J.B. Van Hollen says the ban is still in place and that he will appeal the ruling.

June 9, 2014 - Wisconsin Attorney General J.B. Van Hollen files a petition with the 7th Circuit Court of Appeals in Chicago to halt same-sex marriages in that state.

July 9, 2014 - A state judge in Colorado strikes down Colorado's ban. However, the judge prevents gay and lesbian couples from immediately marrying by staying his decision.