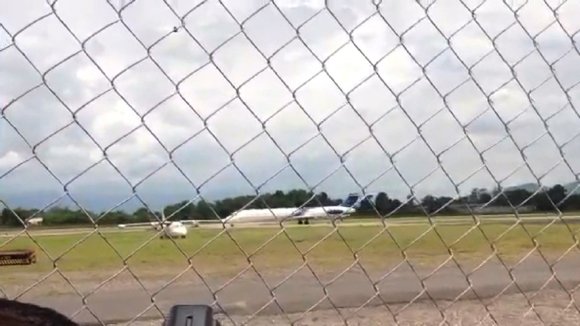 The woman's eyes were swollen and red after she got off a plane in this violence-plagued Central American city Monday.

She told CNN she'd cried the whole way on the flight from New Mexico. Her 6-year-old daughter was beside her.

They were among a group of about 40 mothers and children deported from the United States to Honduras on a chartered flight Monday -- the first group of Central Americans sent home under stepped-up U.S. efforts to crack down on illegal immigration.

Asked about their journey to the United States, her 6-year-old daughter described the dangerous trek north in vivid detail: Stowing away on freight trains. Walking through a forest at night. Seeing monkeys and snakes.

Despite the dangers, her mother told CNN she'll probably make the trek again. There is nothing left for them in Honduras, she said.

Officials from the U.S. Department of Homeland Security displayed similar resolve Monday, saying the flight was a sign of future deportations.

"Our border is not open to illegal migration and we will send recent illegal migrants back," the department said in a statement. "We expect additional migrants will be returned to Honduras, Guatemala and El Salvador in the coming days and weeks."

The group deported Monday had recently crossed the U.S.-Mexico border and had been held in a new temporary immigrant detention facility that opened up in Artesia, New Mexico, late last month, Homeland Security officials said.

In the Artesia facility, which can house up to 700 people and had about 400 within its confines Friday, officials say undocumented immigrants will be held until their legal cases are decided. The goal, officials said last week, is to process their cases in two to four days. Video conferences with judges have helped speed up the process, officials said.

Before the facility opened up, groups of women with children from Central America were released on parole, dropped off at bus stations throughout the Southwest and told to report to Immigrations and Customs Enforcement Offices across the country in about a month.

Officials are working to correct misinformation from smugglers, who've claimed that there are "free passes" for those coming to the United States.

"Beginning this week, we are sending family units back to Central America, so the message is 'We will send you back,' " he said.

The plane arrived Monday afternoon in San Pedro Sula, where violence has earned the city a reputation as the world's murder capital.

There were 18 mothers and 22 children on the plane that arrived in Honduras on Monday, first lady Ana Garcia de Hernandez told reporters, according to CNN affiliate Televicentro. The youngest child on the plane was just months old, she said, while the oldest one was 15 or 16.

She called for Hondurans to chip in to help the returning families and said officials were developing plans to better support them.