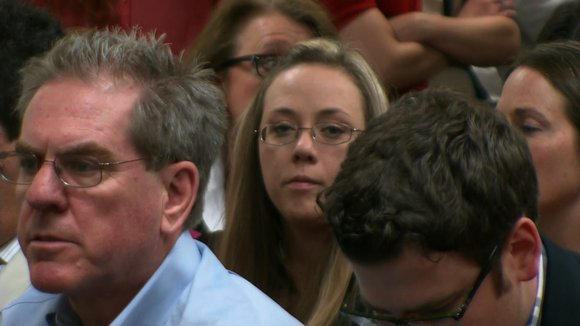 The mother whose toddler died in a hot car near Atlanta last month says she finds comfort in faith but struggles to get through each day.

"Leanna Harris is living every parent's nightmare -- the child she bore and loved every moment of his life has died. For most parents, it is difficult, if not impossible, to comprehend such a thing.

"But for Leanna, that nightmare is all too real. She will never again be able to tuck him into bed at night and return later to check on him," her attorney said Tuesday in a statement.

The statement marked the first time Leanna Harris has publicly described her feelings since she made remarks at the funeral for her 22-month-old son, Cooper.

His death in a hot car tapped parents' outrage, garnered national headlines, and sparked a wide-ranging debate about whether more can be done to prevent such deaths.

"She mourns Cooper's death deeply, in her own private way. She takes comfort from a strong faith in God, but the loss is still overwhelming. Getting through each day seems almost impossible," said Harris' attorney, Lawrence Zimmerman.

He asked for privacy for his client, comparing her situation to that of vindicated Atlanta Olympic park bombing suspect Richard Jewell.

"She asks that she be allowed to grieve in private without reporters calling, following or watching her home. Since his death, she has been unable to have that time of mourning that every bereaved parent needs. Please allow her the dignity to mourn her son in private," Zimmerman wrote.

Police say Leanna Harris' husband, Justin Ross Harris, left Cooper strapped into a car seat in his SUV for seven hours while he went to work on June 18.

Records show that the mercury topped 92 that day, and police say the temperature was 88 degrees when the boy was pronounced dead in a parking lot not far from his father's workplace.

Ross Harris has pleaded not guilty to charges of murder and child cruelty. He remains in jail.

Leanna Harris is not a suspect, although police have alleged she behaved strangely in the days before and moments after the death of her boy.

For example, Ross and Leanna Harris took turns dropping off and picking up their son at day care, and on the day Cooper died, Leanna arrived and was told that Cooper hadn't been dropped off that morning.

"Ross must have left him in the car," she allegedly told day-care employees.

The day-care workers told police they tried to tell her that there could be a multitude of reasons that Cooper wasn't dropped off, but she insisted that Ross left him in the vehicle, Cobb County police Detective Phil Stoddard testified at a hearing for Ross Harris.

He also said that Leanna Harris made an odd remark to her husband while the two were in an interview room after Ross Harris' arrest.

"She asked him -- she had him sit down, and he starts going through this. And she looks at him, and she's like, 'Well, did you say too much?' " the detective testified.