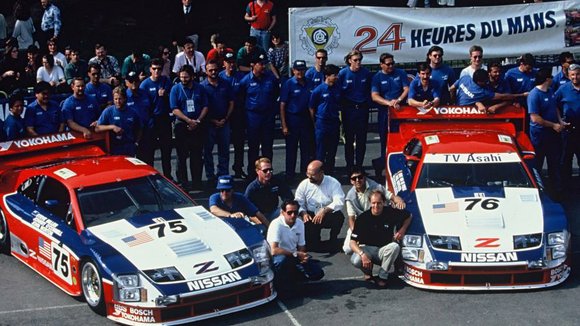 The red, white and blue Clayton Cunningham Racing Nissan Z will compete at the 2014 Rolex Monterey Sports Car Reunion Aug. 14-17 at Mazda Raceway Laguna Seca. It’s the 20th anniversary of Steve Millen’s 24 Hours of Le Mans class-victory behind the wheel of the car.

Nissan is bringing the winning car, along with some original crew members, to the reunion to compete in the historic race.

The No. 75 was prepped by Clayton Cunningham Racing and featured a chromoly steel tube structure, steel and aluminum body and an 800-hp V6.

It’s one of 550 cars that have been invited to compete in the event.

"From the original 1994 Le Mans inspection sticker to the twin-turbo V6 and Nissan 5-speed Hewland crashbox, the No. 75 is the real deal, and we can't wait to see it back on the track at speed with Steve Millen at the controls," said Pierre Loing, vice president of product planning at Nissan North America. "It's also fitting that it will be sharing the paddock space with our new 600-hp Nissan GT-R Nismo -- which might just give the No. 75 a run for the money today."

The No. 75 will run in Group 6B at the Monterey Reunion.