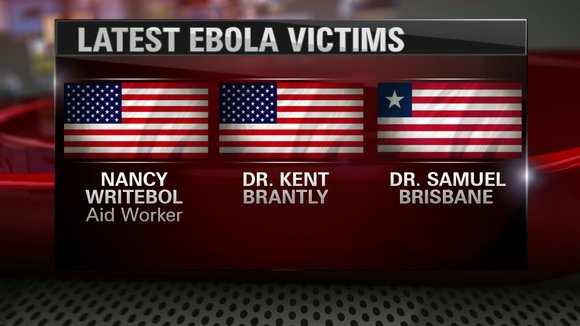 An American doctor trying to quell the Ebola outbreak in Liberia is now infected with the virus, the organization for which he works said.

His Ebola infection was confirmed Saturday.

Brantly, the medical director for Samaritan Purse's Ebola Consolidated Case Management Center in Monrovia, Liberia, has been in the country since last October, Strickland said.

"When the Ebola outbreak hit, he took on responsibilities with our Ebola direct clinical treatment response, but he was serving in a missionary hospital in Liberia prior to his work with Ebola patients," she said.

Health officials say the current Ebola outbreak, centered in West Africa, is the deadliest ever.

As of July 20, some 1,093 people in Guinea, Sierra Leone and Liberia are thought to have been infected by Ebola since its symptoms were first observed four months ago, according to the World Health Organization.

Testing confirmed the Ebola virus in 786 of those cases; 442 of those people died.

Of the 1,093 confirmed, probable and suspected cases, 660 people have died.

And there are fears the virus could spread to the Africa's most populous country, Nigeria.

Lagos, the largest city in Nigeria, has a population of more than 20 million people.

The man arrived at Lagos airport on July 20 and was isolated in a local hospital after showing symptoms associated with the virus. He told officials that he had no direct contact with anyone with the virus nor attended the burial of anyone who died of Ebola.

Confirmation of the death in Lagos followed news that a doctor who has played a key role in fighting the Ebola outbreak in Sierra Leone is infected with the disease, according to that country's Ministry of Health.

Before falling ill, Khan had been overseeing Ebola treatment and isolation units at Kenema Government Hospital, about 185 miles east of the capital, Freetown.

Ebola typically kills 90% of those infected, but the death rate in this outbreak has dropped to roughly 60% thanks to early treatment.

Officials believe that the Ebola outbreak has taken such a strong hold in West Africa due to the proximity of the jungle -- where the virus originated -- to Conakry, Guinea, which has a population of 2 million.

Because symptoms don't immediately appear, the virus can easily spread as people travel around the region. Once infected with the virus, many people die in an average of 10 days as the blood fails to clot and hemorrhaging occurs.

The disease isn't contagious until symptoms appear. Symptoms include fever, headache and fatigue. At that point, the Ebola virus is spread via bodily fluids.

Health workers are at especially high risk, since they are in close contact with infected people and their bodily fluids. Adding to the danger, doctors may mistake the initial stages of an Ebola infection for another, milder illness.