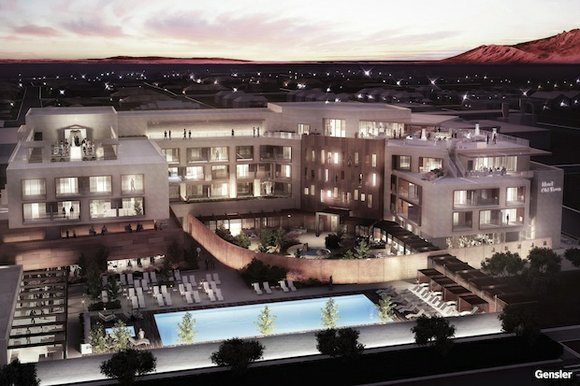 ALBUQUERQUE, NM – (JULY 28, 2014) – Plans have been finalized for a new multi-million dollar hotel in the heart of Old Town, Albuquerque, according to Heritage Hotels and Resorts, Inc. The 118-room project will break ground by late fall with completion set for spring, 2016. The hotel will provide 100 new jobs in Albuquerque. The contemporary boutique hotel will be a contrast of ancient and modern elements. The property will be built adjacent to Hotel Albuquerque and will share Hotel Albuquerque’s pool, ballrooms and chapel. The hotel will be comprised of five levels with guestrooms designed to extend outdoors onto gracious terraces showcasing majestic views towards the Sandia Mountains and downtown skyline or the serene views overlooking the beautiful gardens and pool terrace below.

The goal is to create a hotel that captures the legacy of New Mexico’s Native American culture and history in a modern and luxurious way.

“We’re creating a hotel where guests will experience the true culture of New Mexico in a way that has never been done before,” explains Jim Long, CEO, Heritage Hotels & Resorts. “We are blending ancient building techniques from New Mexico Native Americans with modern amenities and designs from the best designers in the world to create a new hotel that will redefine and advance the architectural building style in our state. The services, sacred architecture and accommodations this hotel will provide will embrace the native people’s spirituality, artistic sensibility and oneness with nature. ”

The hotel will be the first New Mexico property planned by legendary global design firm, Gensler, who drew inspiration from the Anasazi people and the indigenous ruins of Chaco Canyon. “The design creates an unprecedented architectural aesthetic for New Mexico and the greater Southwest region,” said Adam Gumowski, Design Director at Gensler. “Heritage Hotels & Resorts presented a captivating conceptual vision as a catalyst for the design team. The result is a one-of-a-kind property that embraces the spirituality, sensibility and legacy of the indigenous ruins of Chaco Canyon, while simultaneously striving for a contemporary sophistication.”

Specific designs that have been incorporated from the Native American cultures include building the hotel in solar alignment. Ancient masonry techniques have been incorporated into this project. Like the designs of Chaco Canyon this hotel will be constructed so the property’s solar orientation can make the most of the heat in the winter, and the coolness in the summer. Guest rooms will be deeply recessed to allow for solar gain in winter but protect from the sun in summer. The hotel’s five floors will also be built in a traditional stacked pueblo style with the façade stepping back at the upper floors.

The entrance to the hotel will be designed as a welcome sanctuary greeting guests with soothing sounds, flowing water and warming fires in winter before arriving to the main lobby that will offer a two-story Kiva inspired space. Beyond the lobby local landscape architect, Mimi Burns, of Dekker Perich Sabatini has designed a landscape reflecting the randomness of raindrops touching the earth. She will also design tranquil gardens and landscaped opened areas.