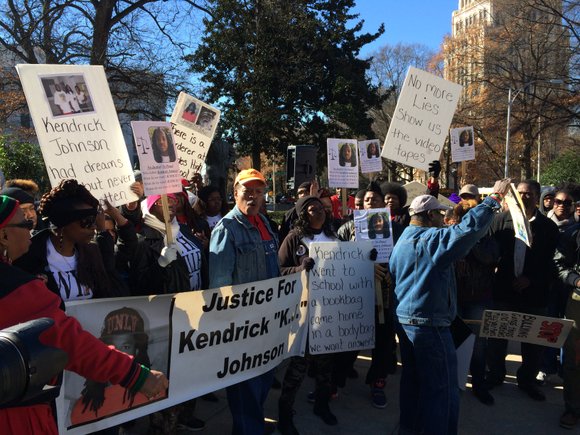 The family of Kendrick Johnson filed a wrongful death lawsuit against school officials claiming their lack of action led to his death at the hands of another student.

Johnson's body was found in a rolled-up mat in the Lowndes High School gymnasium on January 11, 2013.

His parents earlier filed a negligence lawsuit against the south Georgia school district claiming it was negligent and violated Johnson's constitutional right to equal protection based on race. Johnson, 17 when he died, was African-American.

The new lawsuit accuses the Lowndes County Board of Education, its superintendent and the high school principal of ignoring reports that Johnson was repeatedly attacked and harassed by a white student.

"As a direct result of and proximate result of defendants' aforesaid actions and omissions, on or about January 10, 2013, Kendrick Lamar Johnson was violently assaulted, severely injured, suffered great physical pain and mental anguish, and subjected to insult and loss of life, all of which took place at the hands of one or more students while on the property of Lowndes High School and during its normal hours of operations," the lawsuit said.

The complaint said school officials knew about an attack on Johnson by a white student during a school bus trip a year earlier and another attack later.

The other student "had a history of provoking and attacking" Johnson at school, the lawsuit said.

Johnson was "victimized" again "in the presence of the coaching staff and employees" of the school again after his mother complained about the attacks, the suit said.

After Johnson was "improperly accused and blamed for instigating" a school bus fight, school officials refused to let his mother see the bus surveillance video, the filing said.

Johnson was "subjected to undeserved punishment, humiliation and various forms of mistreatment by members of the coaching staff" of the football program, leading to his decision to quit the football team, the suit said.

The older brother of the student who attacked Johnson confronted him and told him "it ain't over," the lawsuit said.

No school official interviewed Johnson or his friends who witnessed the attacks, the suit said.

"This failure to act despite actual knowledge that Kendrick Lamar Johnson was being harassed departed from the defendant Lowndes County School System's own established procedures dealing with harassment and mistreatment, including racial discrimination," the suit said.

School officials also failed to "properly monitor the activities of students throughout all areas" of the campus and to "maintain a properly functioning video surveillance system," the family's suit contends.

Investigators with the Sheriff's Office ruled his death accidental -- concluding that Johnson climbed into the center of the gym mat to reach for a shoe and got stuck. Kenneth and Jacquelyn Johnson believe that their son was beaten to death. They hired an independent pathologist, who found "unexplained apparent nonaccidental blunt force trauma" to the teen's neck and concluded the death was a homicide.

The U.S. Attorney for the Middle District of Georgia launched a federal investigation into the case on October 31, 2013.

An attorney for Lowndes County Schools had not returned CNN's request for comment by Monday evening.