One dead, 13 injured after lightning strikes at Southern California beach 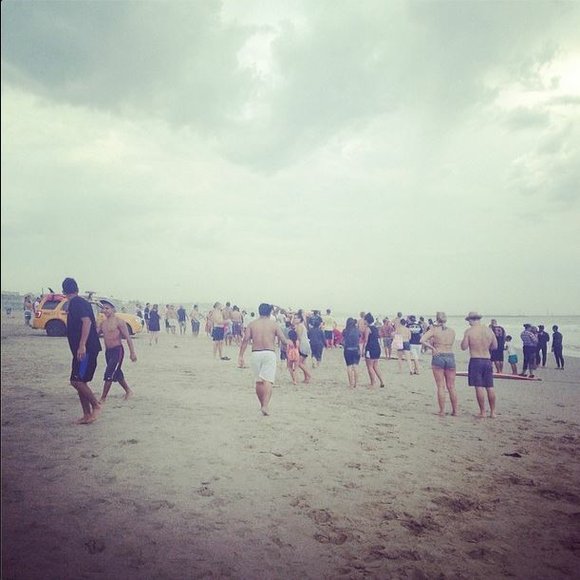 The sudden lightning strike at Venice Beach caused panic as people tried to get out of the water and off the beach.

The Los Angeles County coroner's office confirmed one man in his 20s died at a local hospital after he was rescued from the beach.

But it's too soon to say whether he died from "a lightning strike, drowning or being trampled by the crowd," according to John Kades with the coroner's office.

"The day started out clear, but there were storms in the forecast for the region on Sunday," CNN meteorologist Sherri Pugh said of the isolated thunderstorms that swept through the Los Angeles area.

The lightning hit the water and the beach at 2:51 p.m. PT (5:51 p.m. ET), according to spokeswoman Katherine Main of the Los Angeles Fire Department.

Emergency responders assessed the condition of at least 13 victims -- all of whom were either in or near the water -- at the scene. Of those, seven adults and one teenager were transported to local hospitals.

The National Weather Service in Los Angeles tweeted around the time of the strike that "cloud to ground lightning" had been reported in nearby Marina del Rey and at the Los Angeles International Airport.

Witnesses tweeted they saw a huge bolt of lightning strike the area, with one Twitter user describing an explosion that blew off nearby roof tiles.

Lightning also struck Catalina Island on Sunday. Los Angeles County Sheriff Sgt. Robert Berardi said a man was hit by a lightning strike near a golf course. He was taken to a local hospital, treated and later released.

Lightning fatalities are pretty rare in California. Between 1959 and 2012, 31 people died after they were struck by lightning, according to the National Oceanic and Atmospheric Administration. In comparison, there were 468 deaths from lightning strikes in Florida during the same time period, followed by 215 in Texas.

There is no safe place outside during a thunderstorm or when lightning strikes, the agency said. To reduce the risk of injury or even death during severe weather, people planning outdoor activities of any kind should have a safety plan. At the first clap of thunder, the weather service said anybody outdoors should run for shelter or for their vehicles and they should remain sheltered for at least 30 minutes after the last clap of thunder is heard.

When visiting the beach, where there is limited shelter available for taking cover during a thunderstorm, the weather service advises people to run for their cars at the first sign of thunder or lightning in the distance. The agency also warns against taking cover under the beach picnic shelters. It says water, wet items, like ropes and metal objects, including fences and poles, are big dangers during lightning storms because water and metal are both great conductors of electrical currents.

The weather service also offers these tips for minimizing the risk of getting struck by lightning: Avoid open fields and hilltops, stay away from tall, isolated trees or other tall objects, set up camps in lower lying areas and remember tents do not offer protection from lightning.

There is also professional lightning detection equipment available that issues alerts when lightning is approaching an area. The weather service said it's a good investment for outdoors sports groups or other outside events.