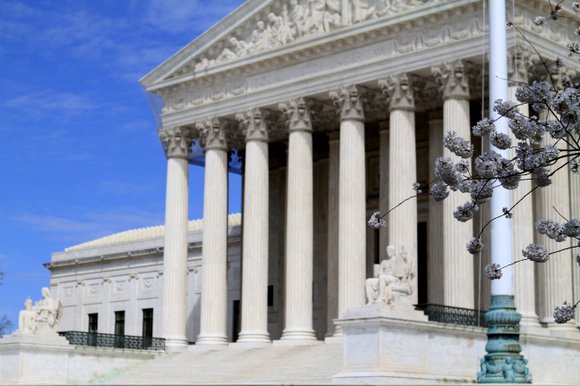 A challenge to Alabama's Republican-drawn legislative maps, which some civil rights and political groups say amounts to an unconstitutional racial quota and gerrymandering, will be reviewed by the Supreme Court.

The justices announced Monday they would decide whether the redrawn boundaries crowded African-American voters into fewer black-majority districts, reducing their political clout in a state where they make up an estimated 27 percent of the population.

Oral arguments would be held in the fall.

The high court's move to intervene will not affect Tuesday's scheduled primaries in Alabama, which will use the redrawn boundaries.

But the map's opponents could ask that it not be implemented for the November general election, at least until the Supreme Court rules, which may not happen for another year.

A special panel of federal judges had allowed the legislative lines to go into effect, saying it did not violate federal law or the Constitution.

All states had to realign their voting districts following the 2010 U.S. Census to reflect population shifts.

The new numbers spell out congressional reapportionment as the states divvy up the 435 seats in the House.

In that census, Republicans nationally dominated the redistricting game because they controlled the entities, mostly state legislatures in charge of drawing new districts.

Redistricting in other states has also led to court challenges.

Alabama is in flux with its white population declining from about 71 percent in 2000 to an estimated 67 percent in 2011.

The Hispanic population is also increasing, while the African-American population has remained relatively stable statewide, although the Birmingham, Montgomery, and Huntsville areas saw some growth.

The redrawn map was attacked by state Democrats and civil rights leaders as "very particular and striking," they said in their appeal to the high court.

But the Republican majority said the Justice Department had reviewed the new map and allowed it to go into effect. They said the 2010 census revealed the older voting maps were badly apportioned.

In a separate ruling last June, the conservative majority on the high court sharply diluted the power of the federal government to maintain oversight over voting procedures in states with a history of voting discrimination, including Alabama.

Some civil rights activists say that decision would embolden certain states to carry out ballot procedures aimed at disenfranchising minority voters. Many Republicans reject such suggestions.