Israel Philharmonic Orchestra to Perform in Houston March 27, Presented by Society for the Performing Arts 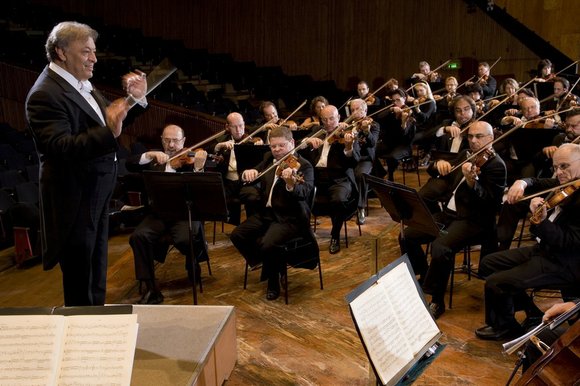 Bringing its historic message of peace through music, the Israel Philharmonic Orchestra (IPO), joined by Principal Guest Conductor Gianandrea Noseda, will return to Houston for the first time in 20 years on Thursday, March 27, 2014, at 8 p.m. at Jones Hall, presented by Society for the Performing Arts. Houston is one of 14 cities on the Orchestra’s U.S. Tour – and the only Texas stop.

Led by Noseda, the Orchestra’s Houston program will feature Berlioz’ Symphonie fantastique, which, through its movements, tells the story of an artist’s self-destructive passion for a beautiful woman. As the symphony progresses, it describes his obsession and dreams, tantrums and moments of tenderness, and visions of suicide and murder, ecstasy and despair. Other works on the program are Faure’s Pelléas et Mélisande Suite, Op. 80; Ravel’s Ma Mère l’Oye (Mother Goose) Suite; and Daphnis et Chloé, Suite No. 2.

The Israel Philharmonic Orchestra is one of Israel’s oldest and most influential cultural institutions. Since its founding in 1936, the Israel Philharmonic Orchestra has dedicated itself to presenting the world’s greatest music to audiences in Israel and around the world. Founded by Polish violinist Bronislaw Huberman, the Israel Philharmonic Orchestra represents the fulfillment of his dream “to unite the desire of the country for an orchestra with the desire of the Jewish musicians for a country.” Huberman spent countless hours persuading first-chair musicians of Eastern European and German orchestras, who had lost their jobs as a result of Naziism, to emigrate to Palestine. In doing so, Huberman created an “orchestra of soloists” which, under the esteemed leadership of Music Director and Conductor Zubin Mehta, continues to absorb new immigrants and serve as a gathering point for musicians from all over the world.

Major soloists and conductors have always performed with the Israel Philharmonic Orchestra. Its inaugural concert was conducted by Arturo Toscanini who felt his participation was a means to demonstrate his opposition to Fascism. The Orchestra members traveled in armored cars to play in a besieged Jerusalem during the War of Independence and, among Israelis, the memory of IPO Laureate Conductor Leonard Bernstein conducting the Orchestra before 5,000 soldiers on the Negev dunes after the battle for Beersheba, was an historic moment. Through it all, the Orchestra has enjoyed associations with such renowned artists as Emanuel Ax, Daniel Barenboim, Yefim Bronfman, Principal Guest Conductor Yoel Levi, Yo-Yo Ma, Lorin Maazel, Honorary Guest Conductor Kurt Masur, Itzhak Perlman, Jean-Pierre Rampal, Arthur Rubinstein, Gil Shaham, Isaac Stern and Pinchas Zukerman. Their time and talent have enriched the cultural life of Israel and have helped the Orchestra to maintain its high artistic standards.

In 2011 the Israel Philharmonic Orchestra appointed Gianandrea Noseda as Principal Guest Conductor during its 75th anniversary season and Maestro Zubin Mehta’s 50th anniversary conducting the Orchestra. Mr. Noseda is among the most sought-after conductors of our time. Since becoming Music Director of the Teatro Regio Torino in 2007 he has propelled the organization into the ranks of leading opera houses. He holds the Victor De Sabata Guest Conductor Chair of the Pittsburgh Symphony and is Conductor Laureate of the BBC Philharmonic. In 2002 he became Principal Conductor of the BBC Philharmonic, a post he held for nearly 10 years. As an opera conductor, he has led the Mariinsky Theatre on tour and in St. Petersburg in new productions of opera and ballet, and returns every summer for the Stars of White Nights Festival. He has also conducted at the Metropolitan Opera, the Vienna State Opera and La Scala in Milan. For his activity in Italy and abroad, he was awarded the Cavaliere Ufficiale al Merito della Repubblica Italiana by the President of Italy.

About Society for the Performing Arts

Founded in 1966, Society for the Performing Arts (SPA) is the largest independent non-profit presenting organization in the Southwest. Since its inception, SPA has sponsored more than 1,000 performances of the world’s finest music, dance and theater events, in adherence to the belief that the arts are fundamental to the overall enrichment and quality of life within the community. In addition to presenting artists, SPA seeks to provide a variety of learning experiences for adults and children through master classes, lectures and special student performances, as well as build relationships between the performing arts and other interests within the greater Houston area and throughout the state of Texas.