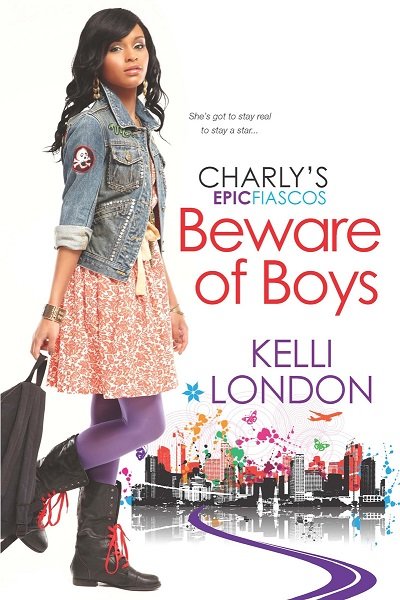 That’s what you get when you help someone. You feel good because you did some good. Honestly, it’s sometimes hard to know who benefits more from your good deed – you, or the person on the receiving end.

But sometimes, even the best intentions get out of hand, as you’ll see in the new novel “Charly’s Epic Fiascos: Beware of Boys” by Kelli London.

As the star of TV’s Extreme Dream Team reality show, Charly St. James should’ve known better than to make a scene in a crowded store. She knew how to deal with fans, but when a bunch of them swarmed her and things got out of hand, there was really no reason that some handsome boy grabbed her and dragged her out of the fray.

He deserved her attitude, for sure.

Still, that wasn’t the way Charly wanted to meet the singer Mēkel. It wasn’t the way she wanted him to know her, either - especially when she learned that she’d been chosen to work with him, boxer Lex, and actor Faizon on a splashy special project for sick inner-city girls. It was an opportunity of a lifetime, made even more appealing when Charly’s boss, Mr. Day, told her that this project would lead to a spin-off show of her very own. How could she pass that up?

She couldn’t, but she hated Mēkel for being a jerk.

Lex was awesome and energetic. Faizon was funny, smart, and Charly was eager to see him on-screen and in person. The boys introduced her to their entourage: Bobsy, who had a chip on his shoulder; Eden, the chaperone; and Coop, who seemed dangerous but totally trustworthy.

As the project started to get off the ground, however, Charly began to think that she’d made a mistake by getting involved. There was something odd about how the three boys interacted, and there was tension all over the place. Something wasn’t as it seemed, and it threatened to destroy everything – but what was wrong? Was there something of which Charly needed to beware?

Looking for a novel that’s not too complicated; not filled with slang, sex, or shootings; and that’s really not too bad? You and your teen may find it in “Charly’s Epic Fiascos: Beware of Boys” – that is, if you can ignore that this story of a girl who has a “reality show” has very little reality in it.

Yes, the plot line is quite far-fetched, but what’s good about this series is that author Kelli London has, over time, made Charly into a strong role model. Charly takes no hassle, strives to make a difference, is responsible, and she knows her own mind. I think that’s a vast improvement over the first book in the series, and it’s what keeps me reading. See? Not. Bad.

While boys can surely read this book, it’s meant for 12-to-16-year-old girls who want something sassy-but-spotless, and for moms who want an escape to share. Give your teen “Charly’s Epic Fiascos: Beware of Boys” and you’ll generally do good.