Amid search for missing in NYC blast, loved ones, friends reflect on those killed 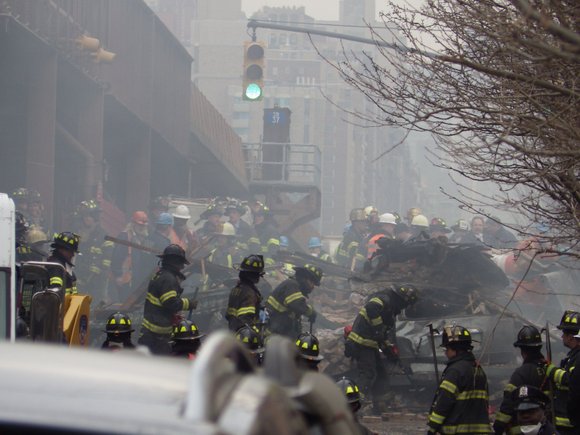 FDNY Crews engage in clean up and rescue efforts Thursday, March 13, 2014, the day after a building exploded and collapsed in East Harlem.

Near 116th Street and Park Avenue, once the heart of New York's large Puerto Rican community, firefighters tore at mounds of bricks in a search for survivors from the collapsed five-story buildings, which housed a piano store and an evangelical church, in addition to apartments.

"We [had] probably about two-and-a-half floors of debris, so we have it now down to about one, one-and-a-half floors," Edward Kilduff, fire chief of department, told de Blasio during a tour of the site. "The victims have primarily been found on the left-center side about 20 feet in."

On Thursday, Con Edison officials said the utility received a call reporting a gas leak around 9:13 a.m. Wednesday from a resident at one of the newer buildings on Park Avenue. The utility dispatched a truck two minutes later, but it arrived after the explosion. The caller reported smelling gas the night before but did not call the utility at the time.

Two gas repairs were made on the block in January 2011 and May 2013 following complaints of a gas odor, Con Ed CEO John McAvoy said. The utility looked back at 10 years of checks and repairs on the gas main on the block and found no "historical condition," he said. In addition, Con Ed checks for leaks in the area on February 10 and February 28 detected no problems.

Fire officials said they received no reports of gas leaks in the area in the last month, while police reported receiving no calls since 2010.

Fire marshals, police arson investigators and the National Transportation Safety Board -- which probes gas explosions -- worked to determine the cause of the explosion.

"In one word, devastating," was how Robert Sumwalt of the NTSB described the scene Thursday afternoon. He called it an "active search and rescue operation."

"You have, basically, two five-story buildings reduced to essentially a three-story pile of bricks and twisted metal."

Sumwalt said the agency was "operating under the assumption that a natural gas leak led to an explosion," but that his team of investigators had not yet examined the crater where the buildings once stood.

Some wreckage was still smoldering Thursday, with the fire whipped by the cold wind, de Blasio said.

"Our biggest concern now is the free-standing wall in the back," Kilduff said. "That was a little more solid last night, but it burned overnight."

Colin Patterson said he was watching TV when a thunderous blast suddenly sent pianos hurling through the air in the shop where he works.

"They flew off the ground," said the piano technician, who also lives in the building in East Harlem. He told CNN affiliate WABC that he crawled through the rubble and managed to escape unharmed.

A building department official said one of the two Park Avenue buildings that collapsed received a city permit last year for the installation of 120 feet of gas piping. The work was completed last June. In 2008, owners of the adjacent building, which also collapsed, were fined for failing to maintain vertical cracks in the rear of the building. The condition was not reported as corrected to the buildings department.