“Mastering the Art of Quitting” by Peg Streep and Alan Bernstein 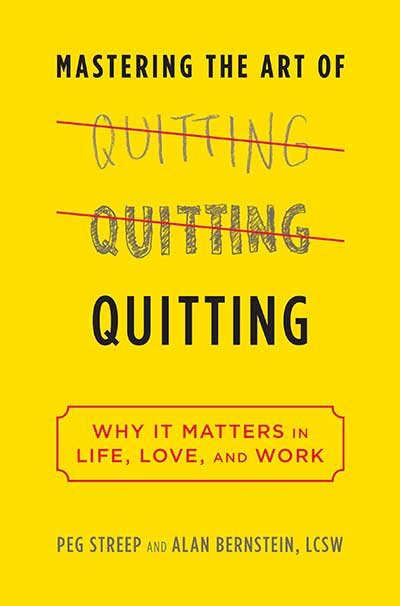 It’s going terribly, actually, and you don’t know what to do. You’re this close to success – you can feel it – and you’ve invested way too much time to throw in the towel. And yet, investors have started to squawk and corporate is withdrawing support.

You can’t pull the plug - but you can’t not. So what next? Read “Mastering the Art of Quitting” by Peg Streep and Alan Bernstein, LCSW, and you might find out.

Throughout your life, you’ve heard that quitters never win. Hang in there, you’ve been told. Don’t give up. Remember The Little Engine That Could.

But is this the right way to think? Streep and Bernstein say no. “Quitting,” they say, is “the necessary first step to rebooting and redefining your goals…” The ability to quit is “necessary as a balance” to persistence and optimism.

The trick is to know when to utilize either side of the scale – and to understand that quitting doesn’t mean that you’re “a quitter.”

Most people, in fact, stick with a dying project a lot longer than they should because of the “myth of persistence,” in which your brain positively responds to a near-win, making you think that you’re close to your goal. “Escalation of commitment” and sunk cost fallacy only exacerbate the unwillingness to end the cycle.

Quitting starts with “goal disengagement” on “four levels simultaneously: cognitive, affective, motivational, and behavioral.” In other words, you need to let go of your goals in your mind, with your emotions, and in your intentions and actions.

Know yourself and “take your own measure of not just your goals and persistence but also your innate ability to quit.” Examine your early childhood and your relationship with your parents. Understand your threshold for failure and strive for emotional intelligence. Learn to end “rumination,” and confront intrusive thoughts “head-on.” Be willing to adjust your goals if you need to, and know how to manage regret.

Finally, learn not only how to quit, but how to quit well. Your happiness and your physical health may depend on it.

“Mastering the Art of Quitting” isn’t an easy book to read: it’s heavy with research and steeped in psychology – and in both cases, much of what you’ll find here has already been rehashed (and is easier to understand) in other recent volumes.

The difference, I think, is that this book is more for people who are seriously stuck.

Authors Peg Streep and Alan Bernstein embrace the kind of introspection that goes deeper than just the door-slamming kind of quit, which the authors admit that they’re not writing about here. No, this is for the kind of quitting that’s long overdue; that isn’t quite understood yet; or that is acknowledged but not yet defined.

I think that reading and grasping what’s in this book will demand a fair amount of time, but if you want to leave a situation gracefully and with forethought, it might help you do so. Find “Mastering the Art of Quitting” and you might quit fretting.