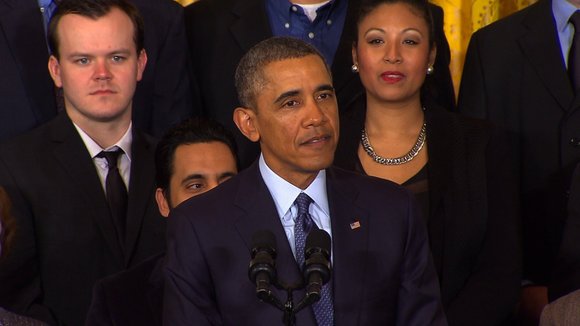 Current rules governing overtime pay are "wrong," President Barack Obama said Thursday, March 13, 2014, as he signed an order directing his administration to reexamine how employees are paid for working more than 40 hours per week.

(CNN) -- Current rules governing overtime pay are "wrong," President Barack Obama said Thursday as he signed an order directing his administration to reexamine how employees are paid for working more than 40 hours per week.

"Overtime is a pretty simple idea. If you have to work more, you should get paid more," Obama said at the White House. "Unfortunately today, millions of Americans aren't getting the extra pay they deserve."

Currently, most hourly workers must be paid time-and-a-half if they work more than 40 hours a week. Most salaried workers do not need to be paid overtime, unless they earn less than $455 a week.

But that works out to $23,660 a year, which is less than the federal poverty level for a family of four.

The $455 threshold for overtime hasn't been raised in 10 years, since President Bush upped it from $250 a week. It would be $553 today if it had gone up in line with inflation.

"If your salary is even a dollar above the current threshold, you may not be guaranteed overtime...your employer doesn't have to pay you a single extra dime," Obama said. "And I think that's wrong."

Obama's push to expand overtime pay for workers pairs with his call on Congress to raise the federal minimum wage to $10.10 per hour, which has faced resistance from Republican lawmakers and some businesses.

The White House has declared 2014 a "year of action" in combating income inequality. Thus far the primary vehicle for the initiative has been executive actions and orders that don't require Congressional approval, though Obama says he's willing to work with lawmakers to help close the gap between rich and poor.

Like a previous order that requires federal contractors to pay employees $10.10 per hour, the overtime pay order that Obama signed on Thursday does not require Congressional approval.

And like the wage increase, business groups were quick to suggest the change could be bad for firms.

"Changing the rules for overtime eligibility will, just like increasing the minimum wage, make employees more expensive and will force employers to look for ways to cover these increased costs," said Marc Freedman, the executive director of Labor Law Policy at the U.S. Chamber of Commerce.

"Similar to minimum wage, these changes in overtime rules will fall most harshly on small and medium sized businesses."