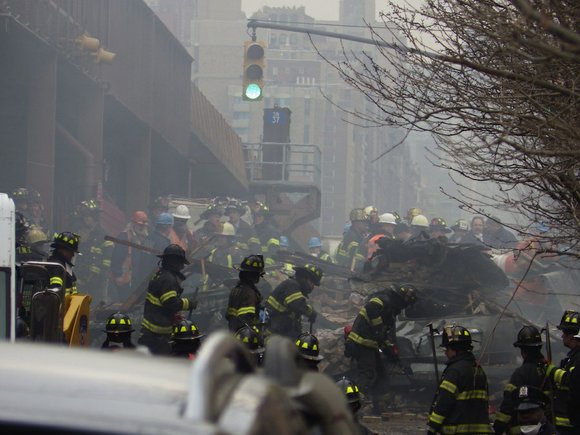 FDNY Crews engage in clean up and rescue efforts Thursday, March 13, 2014, the day after a building exploded and collapsed in East Harlem.

Those two New York buildings where eight people died in an explosion were served by a very old gas main -- 127 years old to be exact. It's the latest incident in what experts warn is a dangerous trend plaguing the nation's oldest cities: natural gas leaks and aging infrastructure.

The cause of Wednesday's explosion in East Harlem, which injured dozens and destroyed the five-story buildings, has not been determined officially. But tests taken of the soil in the area in the hours after the explosion found natural gas at levels as high as 20% when none should have been present, federal investigators said.

"It almost confirms you had a gas leak out there, and the building exploded," McDonald told CNN. "That means we can be 99% sure this was caused by a gas explosion."

Robert Sumwalt of the National Transportation Safety Board, which is investigating the blast, said the readings indicated natural gas might have triggered the explosion that shook the bustling neighborhood.

The soil readings "further lead to the hypothesis that this may well have been a natural gas leak," Sumwalt told reporters. "We would expect to find zero concentration of natural gas in the soil, so it would indicate that at least somehow or another natural gas did work its way into the ground."

Some urban gas lines: Antiquated and hard to reach

The blast comes as many U.S. utilities struggle to maintain or replace antiquated, hard-to-reach and leaky gas mains in older urban areas, according to experts. The most vulnerable mains are made of cast iron or steel.

A day before the explosion, the New York-based Center for an Urban Future said in a report that New York's aging infrastructure "could wreak havoc on the city's economy and quality of life." An estimated $47.3 billion would have to be devoted for repairs to maintain safety.

Leaks cause the city's top utility company, Con Ed, to lose more than 2% of the gas it delivers to customers each year, according to the report. Additionally, 60% of New York gas mains are made of unprotected steel or cast iron, which are prone to leaks and no longer used by main manufacturers.

Con Edison manages one of the oldest gas distribution networks in the country, the report said. The utility's 2,234 miles of gas mains, which serve 833,000 customers in the Bronx, Manhattan and northern Queens, are 53 years old on average.

"According to the federal Pipeline and Hazardous Materials Safety Administration, Con Edison experienced 83 leaks for every 100 miles of main in 2012," the report said. "Corrosion was responsible for a total of 427 of these leaks."