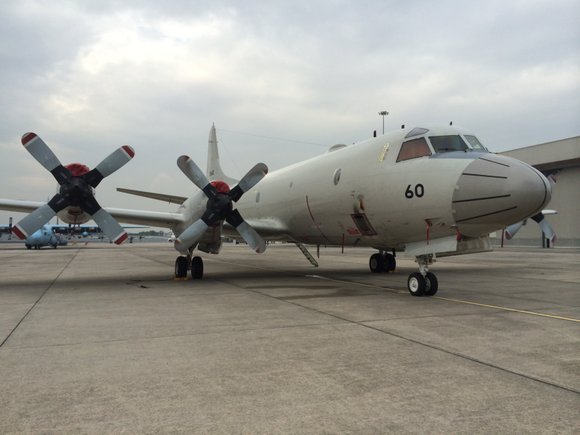 SUBANG, MALAYSIA: "P-3 Orion from Japan waiting to search for the missing MH370 at Subang Airport. It can cover 15K square miles in one 9 hour flight!" - CNN's Will Ripley. As investigators search for clues to unravel the mystery of where Malaysia Airlines Flight 370 went, there were several key developments over the weekend. The search has expanded to cover large swaths of land and sea, including 11 countries and deep oceans. Where the plane went is anybody's guess.

And it looks like that turn was no accident.

A law enforcement official told CNN Tuesday that the aircraft's first turn to the west was almost certainly programmed by somebody in the cockpit.

There is no indication of when the coordinates were entered into the computer. It could have been done during the flight or, as is more common, during preflight preparations, the official said.

A report from NBC News Tuesday night added another twist, claiming the programmed change in direction was made at least 12 minutes before the plane's co-pilot signed off to air traffic controllers, telling them, "All right, good night."

Analysts on CNN's "AC360" offered different interpretations of what that report, if accurate, could mean -- with some experts cautioning the change in direction could have been part of an alternate flight plan programmed in advance in case of emergency.

"We don't know when specifically it was entered," said Mary Schiavo, a CNN aviation analyst and former inspector general for the U.S. Department of Transportation.

"Because by doing that," he said, "what it basically shows is that this thing was already heading in a different direction when they're saying good night."

But still, the new details about what happened don't add up to a clear answer.

"Like everything on this story, we learn a little bit," Schmidt said, "but then we just have more questions."

Evidence that someone programmed the plane's computer and the Thai data that surfaced Tuesday corroborate a leading theory from Malaysian investigators: The missing plane veered off course in a deliberate act by someone who knew what they were doing.

But investigators still don't know who was at the controls, or why whoever was flying the plane apparently took it far from its original destination.

An initial search of the pilots' personal computers and e-mails found nothing to indicate that the sudden deviation in the aircraft's route was planned, U.S. officials said Tuesday after being briefed by Malaysian authorities.

The officials said they had also reviewed cockpit conversations between the plane and air traffic controllers and heard nothing suspicious or anything that would explain why the jetliner changed course.

And a flight simulator belonging to pilot Zaharie Ahmad Shah did not show any of the unexplained paths the plane may have flown after it went off the grid, officials said.

Schiavo said it's no surprise investigators found nothing suspicious in the pilots' homes.

"I've worked on many cases were the pilots were suspect, and it turned out to be a mechanical and horrible problem," she said. "And I have a saying myself: Sometimes an erratic flight path is heroism, not terrorism. And I always remind myself of that, not to jump to that conclusion. Sometimes pilots are fighting amazing battles, and we never hear about it. "