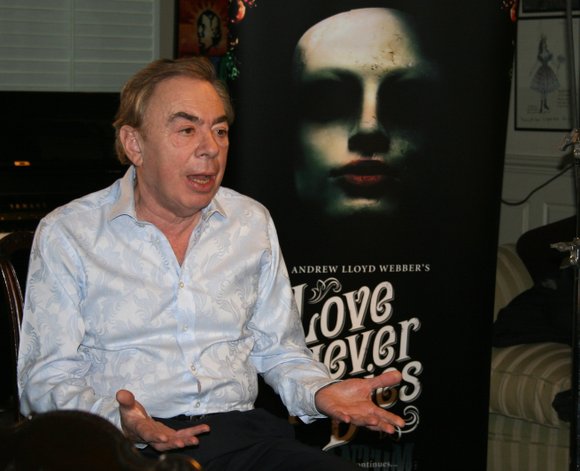 (CNN) -- He's created some of the world's highest-earning stage shows, so it's only fitting that Andrew Lloyd Webber will be in the limelight on the day of the planet's most expensive horse race.

The man behind hits such as "Cats," "Starlight Express" and "The Phantom of the Opera" also has a big interest in the sport of kings, through which he met his third wife Madeleine -- a former equestrian rider who competed alongside Britain's Princess Anne.

Married since 1991, they have owned a stud on a 5,000-acre site in Watership Down (setting for the 1970s novel and film of the same name) which has produced a series of winners.

The latest is The Fugue -- a filly who has already amassed earnings in excess of $1.5 million and boasts her own Twitter page with more than 1,000 followers.

The name is befitting of her owners -- the fugue being the most complex polyphonic musical form, involving imitation -- while the literal translation of "to chase" is considerably more apt for the animal.

"I've ridden a lot of good horses in a relatively short period of time and she's right up there with the very best. She's a superstar," says jockey William Buick, who rode her for the first time less than two weeks ago.

The Fugue will not be lining up in the showpiece $10 million Dubai World Cup, which is run on artificial turf, but will compete earlier Saturday in the Dubai Duty Free Stakes -- which has a relatively paltry $5 million on offer and is held on a traditional surface.

It is the richest day of thoroughbred racing on the planet, with $27.25 million up for grabs in total.

"She's a filly whose best form, her only form, is on the turf," says trainer John Gosden. "Had it been the end of the season we might have thought differently.

"But this is her very first race of the year so we felt it best as a filly to run her on the surface she knows and likes best even if the distance is slightly shorter than she might normally run over."

Last year The Fugue won the Irish Champion Stakes Group One race and came second at the prestigious Breeders' Cup in the U.S. She is the bookmakers' favorite this weekend -- though punters at the $1 billion Meydan Racecourse will not be able to bet on the outcome due to Dubai's rules against gambling.

"She's a talented filly and she's won some lovely races but a couple of times she's been unlucky and not had the rub of the green," says Gosden, a former economist who -- with Buick -- makes up an unconventional team behind The Fugue.

If Madeleine Lloyd Webber -- who met the theater impresario through his horse-loving neighbors in the southern English county of Hampshire -- is the mastermind behind the stud since its inception in 1992, then Gosden is the former "wayward son" who has rediscovered his true path in life.