Rushion and Cicely McDonald present the first of $75,000 in scholarships to African American Students at the University of Houston Black Alumni Association 24th Annual Gala 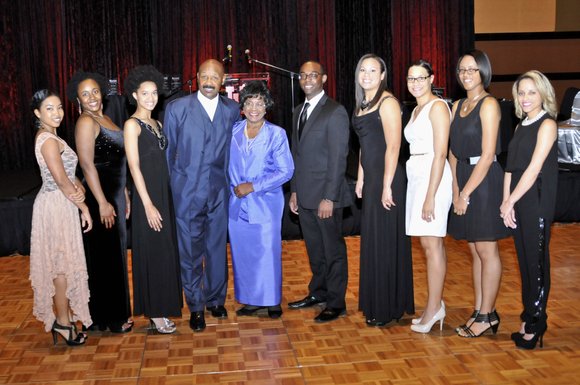 This unprecedented gift of full-tuition awards raised the overall 2014 scholarship award tally to $33,500. “When I was in school,” McDonald said, “I would see lots of kids getting $500 scholarships, but they were still struggling. So, I asked “how much does it cost for tuition, and that’s what we decided to give.”

He also gave credit to the University of Houston, particularly the Department of African American Studies for “changing his life.” Although he earned a bachelor’s degree in mathematics and his wife earned her B.S. and O.D. degrees from the UH College of Optometry, this class helped him to understand who he was and what he could become.

The evening included eight additional scholarship presentations to UHBAA Pathway to Excellence Scholars and one endowed scholarship from Bracewell and Giuliani, LLP, the group’s first endowment established in 2007.

The Rushion and Cicely McDonald Scholarship was established in 2013 to provide scholarships to African American students enrolled at the University of Houston in the colleges of Natural Sciences and Mathematics and Optometry. Its purpose is to offer a source of merit-based aid to bright, talented individuals from working families who desire a Tier One education.

Victoria Banjo, a senior majoring in finance, received The Bracewell & Giuliani Endowed Scholarship of $1,500 from Jeff Vaden, a partner in the firm.

UHBAA President Brandon Wiggins (’10) presented special recognition awards to the McDonalds and to Vonda Mays, a past president who facilitated the partnership with Rushion and Cicely.