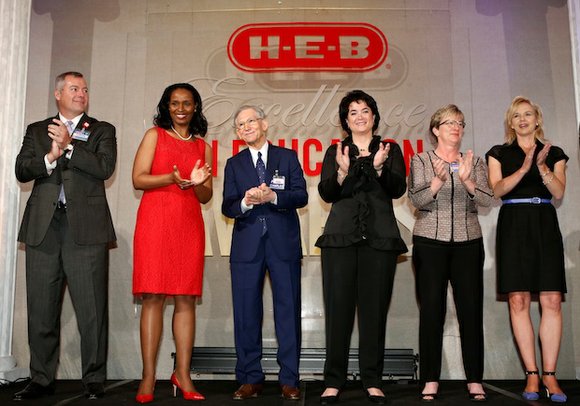 H-E-B chairman and CEO Charles Butt, center, on stage at the HEB Excellence in Education Awards at the Grand Sonesta Hotel in Houston, Texas Saturday May 3, 2014. 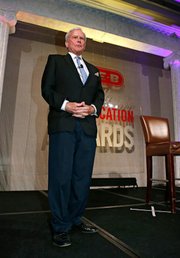 HOUSTON, TX — On Saturday, May 3, H-E-B announced statewide winners of the 13th annual H-E-B Excellence in Education Awards during a banquet at Houston’s Royal Sonesta Hotel. At the ceremony, H-E-B Chairman and CEO Charles Butt personally handed out $430,000 in cash awards and grants, and congratulated eight educators, two school districts, one early childhood agency and a public school board for being among the best in Texas.

Tom Brokaw delivered the keynote address to a ballroom packed with hundreds of educators, elected officials, community leaders and H-E-B employees. Brokaw is a legendary journalist, author and news anchor best known for his role as anchor of NBC Nightly News for more than two decades.

This year, H-E-B added a new category to the awards program to honor a public school board whose members demonstrate exceptional leadership and service to the children of the district they serve. The following winners were selected from a pool of 58 finalists by judges who include former winners, school administrators, and university and community leaders.

The 2014 H-E-B Excellence in Education Award Winners Are:

The Rising Star Category recognizes teachers with less than 10 years of experience. Winners received a $5,000 check for themselves and a $5,000 grant for their school. 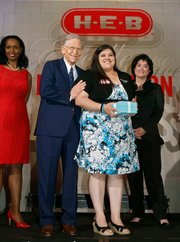 The Leadership Category honors teachers with 10 to 20 years in the classroom. Winners received a $10,000 check for themselves and a $10,000 grant for their school.

The Lifetime Achievement Category salutes teachers with more than 20 years of experience. Winners received $25,000 in cash for themselves and a $25,000 grant for their school.

Elementary school principal category winner Gladys Graves of Chilton Elementary of Chilton, Texas reacts to winning at the HEB Excellence in Education Awards at the Grand Sonesta Hotel in Houston, Texas Saturday May 3, 2014.

Winning principals received $10,000 in cash for themselves and a $25,000 grant for each of their schools.

The winning public school board received a $25,000 cash prize. 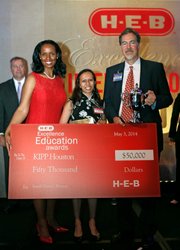 Small District winner Sehba Ali of KIPP Houston at the HEB Excellence in Education Awards at the Grand Sonesta Hotel in Houston, Texas Saturday May 3, 2014.

About the H-E-B Excellence in Education Awards:

H-E-B launched the Excellence in Education Awards program in cooperation with the Texas Association of School Administrators in 2002 as a positive way to support public education in Texas. It has become the largest monetary program for educators in the state, spotlighting best practices and celebrating the passion and creativity of Texas educators.