“Mistakes I Made at Work” edited by Jessica Bacal 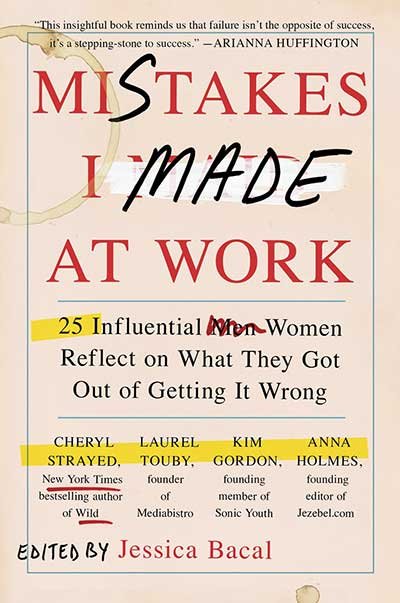 Everybody knows what you did.

It didn’t take long for word to get around, actually; you can tell by the smirks and the lack of eye-contact in the hall. It was a colossal error, one that cost the company more than you care to think about. And it was all your fault.

How can you ever bounce back from something like this? Will it end your career? Twenty-five leading women say no – and you’ll find out why in the new book “Mistakes I Made at Work,” edited by Jessica Bacal.

It’s a platitude everybody’s heard before: learn from your mistakes. Embrace them, we’re told, and grow from them. But Jessica Bacal wondered how, with a culture that demands perfection from women and a reluctance to discuss such things, we can ever learn anything from our errors?

She contacted influential women from several walks of life, and asked them about their mistakes, what they learned, and how they grew from it.

Laurel Touby, founder of Mediabistro.com, learned the hard way that no job was worth ignoring who she really was, down-deep. Her advice is to “pursue work environments that feel like the right fit for you.”

For writer Rachel Simmons, achievement was the only goal until she accepted a Rhodes scholarship. She realized, once she was at Oxford, that being a Rhodes Scholar was a big mistake for her. She was embarrassed to quit and her family was angry, but it was a turning point in her life. Her advice: “Don’t be afraid to quit.”

Lawyer and social activist Reshma Saujani lost a Congressional race in 2009 and “I felt like I had let [supporters] down.” She advises readers to keep trying: “fail fast, fail hard, and fail often.”

From economist Carla Harris: if you “don’t know, you need to ask.” From writer Cheryl Strayed: “We’re all rough drafts.” From physician Danielle Ofri: nobody learns through humiliation. Says writer Alina Tugend: master the art of asking for money. And from writer J. Courtney Sullivan: “be a kind and generous coworker. You never know where it might lead you in the future.”

As a Champion Goof-Up from way back, I approached “Mistakes I Made at Work” with a little trepidation. When it comes to blunders, there are lots of chestnuts out there that are of little help – and then there’s this book.

I was pleased with the candor that editor Jessica Bacal found when interviewing the women she chose. Some of the mistakes in this book might seem minor, while some are pretty good-sized but the meaning behind each brief chapter is the same; to wit: these women messed up, they were embarrassed, and they lived to tell about it. Best of all, things were often better, post-oops. And wow, that’s pretty comforting to anybody who knows she can’t cast that first stone…

This is an excellent book to give to a new grad, an old hand, an employee who’s feeling red-faced, or YOU. Reading “Mistakes I Made at Work,” in fact, is something you’ll be glad you did.