Protesters lash out at peacekeepers in Central African Republic 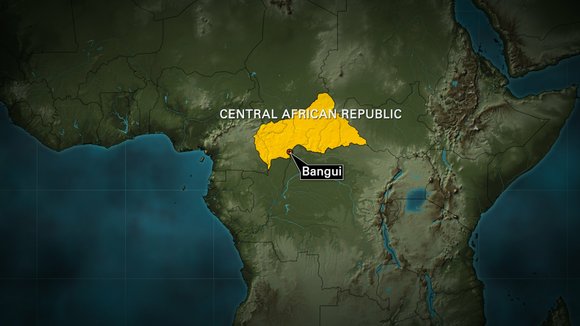 Thousands of angry protesters poured into the streets of the Central African Republic's capital Friday. The target of their rage? Peacekeepers sent to protect them.

Two people were fatally shot, according to the African Union-led peacekeeping force, known as MISCA, when peacekeepers opened fire as their base came under attack in Bangui.

Tensions have been high in Bangui for months. But they erupted this week after an attack Wednesday on a church that killed at least 17 people, according to the U.N. refugee agency.

Another 27 civilians were reportedly abducted by assailants and remain unaccounted for, the U.N. agency said.

It said the church, Notre Dame de Fatima, was housing 9,000 internally displaced people at the time of the attack.

They included some 2,050 people who had moved there only a week ago to escape trouble in nearby neighborhoods, the refugee agency said.

Some of those killed and injured in the church attack were taken Wednesday evening to Bangui's Community Hospital, where medical personnel battled to save them.

In the emergency room, a priest and a 15-year-old boy arrived as patients but did not survive.

Other victims were driven straight to the morgue. Two children were among those killed, the refugee agency said.

It's not clear who attacked the Church of Notre Dame de Fatima.

But the Fatima area borders the unstable "PK5" neighborhood, where the last remaining group of Muslims in the capital live, trapped and under siege from Christian militia groups.

According to witnesses, an armed group burst into the church Wednesday afternoon, shooting people in and around the area.

Smoke rose as the youths burned tires, while Christian, or anti-balaka, militiaman moved through the city and sporadic gunfire rattled in the streets.

A few hours later, on Thursday morning, a mosque in Bangui's La Kouanga area was destroyed in apparent retaliation for the church attack. The attackers ransacked the interior, removing carpets and breaking down the doors.

It was one of the last mosques remaining outside the PK5 neighborhood. Local Christians had been protecting the mosque because it was being used by foreign Muslims, from Senegal and elsewhere, but that tolerance came to an abrupt end with the church attack.

AU troops tried to remove the barricades Thursday, but tensions were high around the mosque.

Hundreds also came out in the streets to protest against the international peacekeeping forces -- French troops and the MISCA forces -- whom they accuse of doing too little to protect the people.

The International Red Cross described the situation in Bangui as "fluid and somewhat chaotic."

Its teams on the ground have received reports of injured people in the demonstrations but are still assessing the number of casualties, it said.

People in Bangui are not alone in suffering the effects of brutal sectarian violence. And once again, the peacekeepers sent to protect the people are bearing the brunt of their anger.