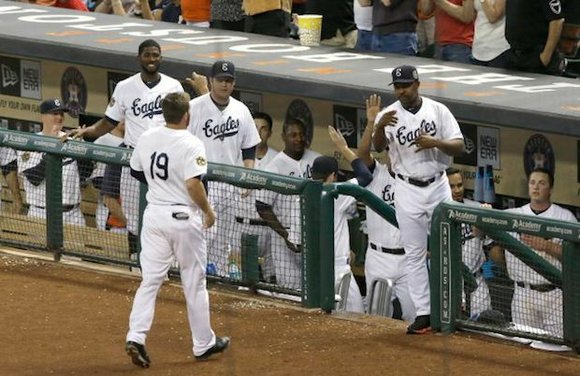 Astros honoring the Civil Rights Movement by wearing the Houston Eagles uniform, the only Negro team in Texas history. http://www.timesunion.com

It was an exciting night for baseball having its annual Civil Rights Game. This year the game was held at Minute Maid Stadium where the Astros played the Baltimore Orioles. In attendance at this game was legendary hall of fame NFL star Jim Brown, founder of Motown Berry Gordy, and Baseball commissioner Bud Selig, along with many others. This event emphasized the impact Major League Baseball had on civil rights.

Berry Gordy shed some light on Jackie Robinson by talking about all that Jackie Robinson endured, and how inhuman it was. Robinson still made a huge impact on the world. “MLB had a lot to do with my thought process and game plan in dealing with the success. I did not set out to become a civil rights leader. I just felt like everyone should hear my music”, said Gordy. Berry Gordy, being so passionate about his music, said he loves to see talent and see it develop in the right way. He even brought Jadagrace Berry, an upcoming singer that he works with, to sing the national anthem for the game.

Aside from the exciting events that happened before the game, 38,482 fans cheered the Astros on as they won their seventh consecutive game which hasn’t been done since July 27-August 3, 2010. Boxing legend and Houston native George Foreman started the night out right throwing the first pitch of the game. The Astros came out honoring the civil rights movement by wearing the Houston Eagles uniform, the only Negro baseball team in Texas. There was a great vibe in the ballpark, as though the Astros had been on a winning streak.

The Orioles started the game off strong getting a quick run in the second inning. The Astros trailed 1-0. It was a bit of a different atmosphere seeing as though Jose Altuve and George Springer, who normally lead the team, were having an off night. Although this wasn’t Altuve’s best night, he did steal his 20th base of the season during the game. Luckily an exciting seventh inning turned the game around when the Astros had back-to-back RBI doubles from Robbie Grossman and Jonathan Villar, who actually hit a ball into the gap of right field to help Grossman get the game-winning run. The Astros have a lot to celebrate. In addition with Altuve’s success in steals, Friday night’s game featured rookie George Springer who hit his seventh home run in a seven game span. He is the only rookie to do this since 1937.

The win wrapped up an exciting day of celebration starting with the Civil Rights Luncheon earlier that morning honoring Berry Gordy with the MLB Beacon of Change award, Jim Brown with the Beacon of Hope award, and the late Dr. Maya Angelou with the Beacon of Life award. Good Morning America's Robin Roberts accepted the award on Dr. Angelou's behalf and gave the keynote address. It’s clear that MLB has left a major mark in history.