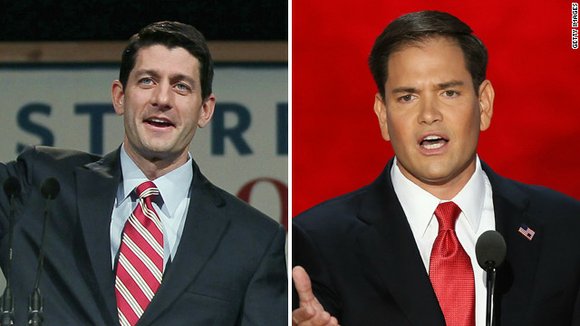 Their plan could be voted on in the new Congress next year, when the GOP will control both the House and Senate.

The Washington Examiner first reported that Ryan and Rubio began discussing a plan this spring, and the Tampa Bay Times published another report about the collaboration on Monday. But with Ryan ascending to a top House committee post and the Senate being run by Republicans in 2015, the joint effort gets new momentum.

No details about the Ryan-Rubio health care proposal were disclosed by either Republican's offices, and both say discussions about the issue are continuing. A spokesman for Ryan told CNN that the Wisconsin Republican "has been talking with reformers, like Senator Rubio, about solutions to deliver quality, affordable health care coverage to American families."

House Speaker John Boehner pledged back in January that House Republicans would draft and vote on an alternative to Obamacare in 2014.

The GOP controlled House voted more than 50 times on bills to change or repeal the law, but has not voted on their own proposal. "Repeal and replace" was a key refrain from House GOP members when they took control of the House after the 2010 midterm election. Ryan was part of a group of members who met and discussed various proposals this year, but divisions inside the GOP conference stalled that effort, and leaders put any vote aside until after the midterm election.

Ryan, the former 2012 GOP vice presidential nominee, is expected to become chairman of the House Ways and Means Committee next year, a powerful panel that oversees the tax code and key parts of the health care law. A key issue that he and Rubio will have to address is how any new health care bill might change or eliminate coverage for many of those who used tax credits to enroll in plans since Obamacare went into effect.

Last week Boehner and GOP Senate Leader Mitch McConnell outlined a series of proposals they planned to take up in the new Congress in an op-ed in the Wall Street Journal, including repealing Obamacare. But a day earlier Obama said he won't sign any bill that completely rolls back his signature legislative accomplishment, and Republicans lack the votes to override a veto. Instead the President said he was open to changes to improve how the law works.

Boehner already plans to House votes to dismantle parts of the law -- such as repealing a tax on medical devices that helps fund the law, and changing the law's requirement that employers provide health insurance to those working 30 hours a week to 40 hours a week.