Batman V Superman's Daily Planet Logo Will Look Like This 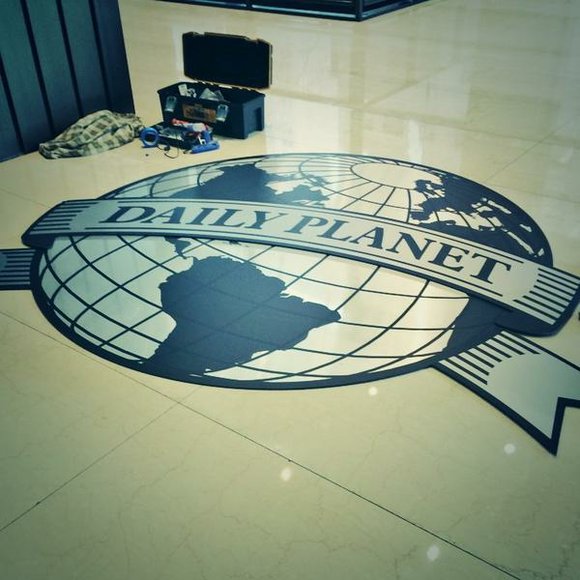 The Daily Planet may have been at ground zero in Man of Steel, but not even an alien invasion can keep a good newspaper down. Things were back up and running surprisingly fast by the end of the film, and Metropolis’ most esteemed news source will return for Batman v Superman: Dawn of Justice, along with a new logo. Re-branding is important, after all. 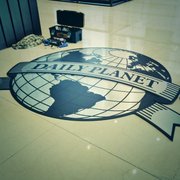 This Tweet shows the new Daily Planet logo plastered on the floor. Not a bad design to see when walking into the lobby. Zod’s attack devastated Metropolis, which is why rebuilding, most literally and metaphorically, is all the more important. This logo has both a classic and modern feel to it, and it looks like it represents a new era for the paper quite well.

Filming in Chicago for the 2016 blockbuster began on Monday and is expected to finish later this week. As the Tweet mentions, 111 E. Wacker St. is the host building for the Daily Planet scenes. In Man of Steel, the Chicago Board of Trade building was used for the exterior of the Planet, while indoor shooting took place at the Willis Tower. As we saw at the end of the first film, Clark Kent will be working the newspaper to keep track of any dangerous events. Amy Adams and Laurence Fishburne will also be reprising their roles as Lois Lane and Editor-In-Chief Perry White, respectively.

Although Lois and Perry played important roles in Man of Steel, there wasn’t much time spent in the Daily Planet building itself. There were brief scenes in the office with Lois, Perry and their co-workers Steve Lombard and Jenny the intern, but the building was demolished during the Kryptonian battle before viewers could become familiar with it. It’s unclear how much time has passed between Man of Steel and Batman v Superman, but the newspaper will definitely be back to keep the citizens of Metropolis apprised of current events - especially those relating to Superman and the mysterious vigilante from Gotham.

One of the defining features of the newspaper has been the globe symbol, which is not only placed prominently on the front page of the newspaper, but the paper’s physical location. In most Superman adaptations, a giant globe adorns the top of the Daily Planet building. While it looks cool, this spherical structure also has a tendency to fall over during attacks on Metropolis, leaving Superman to catch it before it crushes any civilians. In contrast, the globe was only briefly seen at the last scenes of Man of Steel, in the lobby as Clark Kent walked in for his first day of work. If the upcoming movie is taking more inspiration from the comics books, perhaps the newspaper will have the globe nestled at the top of the building this time, although with all the villains take Superman might be dealing with, it might not be wise to risk that thing falling and killing people.