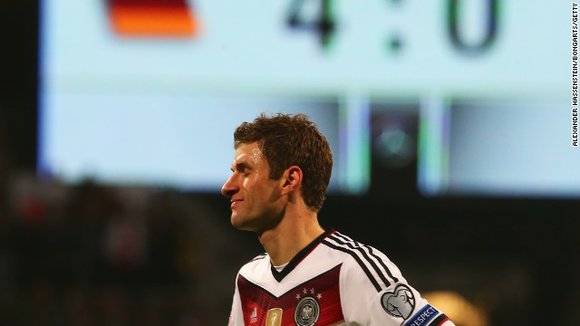 (CNN) -- It was the first win in three Euro 2016 qualifying games for the mighty Die Mannschaft but another unconvincing performance by Germany against the minnows of Gibraltar Friday.

The 2014 World Cup winner was expected to at least match the seven goals that both Poland and Ireland had put past Gibraltar in their last two Group D matches, but only managed four.

Perhaps suffering a hangover from its Brazil triumph, defeats to Poland and a draw against the Irish, have left Germany in third place in the group.

Gibraltar, who only became a full UEFA member last year and are not recognized by FIFA, have only one full-time professional in its lineup, Scott Wiseman from third-flight English side Preston.

But it put on a battling performance against a near full strength team picked by Germany coach Joachim Low and deployed in an attacking 3-5-2 formation.

World Cup hero Thomas Muller started the scoring and added a second, while fellow Bayern Munich star Mario Gotze was also on the score sheet before half time.

The expected goal glut after the break did not materialize with the occasional jeer ringing around the stadium in Nuremberg.

The fourth, and only goal of the half, came on 67 minutes when Lukas Podolski's cross was turned into his own net by visiting defender Yogan Santos.

"I am anything but happy, the team didn't measure up the way we had wished," Low told reporters after the win .

"We want to play like world champions, so from that perspective four goals isn't enough."

Poland still tops Group D after a fine 4-0 win in Georgia, while Germany, Ireland and Scotland are all tied on seven points, three points adrift.

Scotland boosted its qualifying chances with a 1-0 win over the Irish in Glasgow, Shaun Maloney's fine strike in the second half proving decisive at Celtic Park.

Germany might have missed its chance to boost its goal difference and confidence, but at least avoided the humiliation suffered by 2004 European champion Greece.

Playing at home in Athens, Greece's dreadful start to Group F qualifying continued with a 1-0 home defeat to the tiny Faroe Islands.

Under new coach Claudio Ranieri, the team which reached the last 16 of the World Cup, went down to a strike from Joan Edmundsson just after the hour mark.

Romania strengthened its position at the top with a 2-0 home win over Northern Ireland with defender Paul Papp grabbing both its late goals.