Hagel acknowledges may have to consider troop recommendations in Iraq 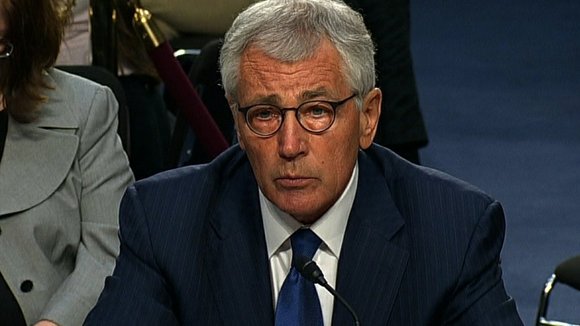 (CNN) -- Defense Secretary Chuck Hagel is acknowledging he may have to consider recommendations to place ground forces in Iraq to help forces there locate targets if, in fact, the chairman of the Joint Chiefs of Staff makes that recommendation.

But these would not be fighting forces, Hagel said. "There will be no American combat troops in Iraq or Syria."

Gen. Martin Dempsey has suggested at least twice that a recommendation of ground troops could come, although he has emphasized he has not made that proposal yet.

He has also said that he doesn't "foresee a circumstance when it would be in our interest to take this fight on ourselves with a large military contingent."

The general landed in Iraq on Saturday to make a first-hand assessment of the situation.

"If we get to any other variation of recommendations from General Dempsey, we will deal with it, but we are not there yet," Hagel told CNN in an interview Saturday at the end of a daylong seminar on national security strategy at the Ronald Reagan Presidential Library in Simi Valley, California.

Obama: No change of mind

At the G20 summit in Australia, President Obama said that he had not changed his mind about U.S. ground forces when it comes to Iraq.

He still does not plan to deploy them, and Dempsey "has not advised me that I should be sending U.S. troops to fight," he said.

But the President did not rule it out completely, if confronted with the most dire of dangers.

"There are always circumstances, in which the United States might need to deploy ground troops," Obama said. "If we discovered that ISIL had gotten possession of a nuclear weapon, and we had to run an operation to get it out of their hands, then yes, you can anticipate that not only would Chairman Dempsey recommend me sending U.S. ground troops to get that weapon out of their hands, but I would order it."

Hagel declined to answer whether any of the top leadership of the Khorasan Group have been killed by U.S. airstrikes in Syria, but said the group still poses a serious threat.

"We know they are planning and plotting attacks against our interests, Europe specifically. So, yes, that is why we target them."

The issue of whether the White House and the Pentagon have a sufficient strategy to deal with ISIS dominated much of several panel discussions.

In blistering criticism of President Barack Obama and the Pentagon, McCain said, "No one outside the Joint Chiefs of Staff believes we have a strategy" to defeat and degrade ISIS, as set forth by the administration.

Panetta and Gates have recently written books which have criticized Obama. In his remarks, Gates likened Obama to President Lyndon B. Johnson in what he called "micromanagement" of military policy and targeting during the Vietnam War.

Jeh Johnson said "uppermost" in his mind is that a lone wolf attack inspired by ISIS could strike the United States at a moment's notice.