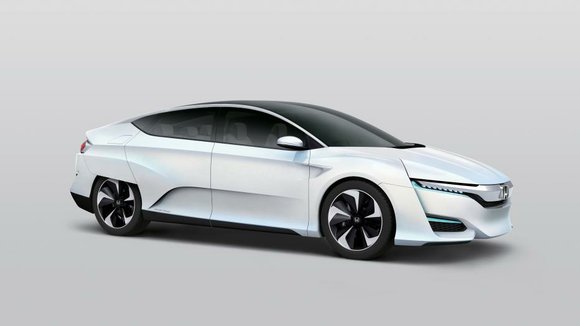 Honda has announced its FCV hydrogen fuel cell vehicle will launch in Japan by March of 2016 and then in the U.S. and Europe.

Advancements since the Honda FCX Clarity have yielded more than 100kW of power, according to Honda, with a power density at 3.1kW/L, an increase of 60 percent. The fuel-cell stack size has also been reduced by a third. The overall package is now good for 300 miles on a tank with a five-minute refill. That’s very similar to the recently announced Toyota Mirai.

Like Toyota’s deal with Air Liquide, Honda joined the public-private partnership H2USA, which brings together automakers, government agencies, hydrogen suppliers, and the hydrogen and fuel-cell industries to identify cost-effective solutions that can deliver affordable, clean hydrogen fuel in the United States.

In June 2013, Honda and GM entered into an agreement to co-develop the next generation of fuel-cell vehicles, aiming for a 2020 timeframe. Honda says the collaboration includes sharing technologies, economies of scale and other benefits.

Honda is also expected to make an announcement at the LA Auto Show regarding its commitment to California’s hydrogen refueling network.