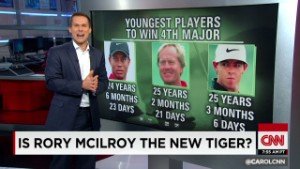 It's an all too familiar feeling for the high handicap golfer.

(CNN) -- It's an all too familiar feeling for the high handicap golfer.

The total mishit which instead of launching the ball to the heart of the green instead sees it barely leave the ground and end in deep rough.

So when the same fate befell world number one Rory McIlroy at least most of the large gallery following him Friday at the World Tour Championship in Dubai could empathize.

McIlroy had been in a perfect position in the middle of the seventh fairway with a five-wood in his hand as he attempted to hit the green at the par-five hole with his second shot.

But hitting the lush turf before the ball, his lame effort squirted left and into an awkward position.

"He's human after all" was the verdict of the TV commentary team and McIlroy's followers on social media as the European Tour official website was quick to post the evidence.

McIlroy could even afford a wry smile -- "a fat, low, duck-hook runner that was not intentional," was his verdict after the round -- before normal impeccable service was resumed.

From the tricky position in deep rough he conjured up a superb recovery shot to within a few feet of the flag.

But the Northern Irishman, who has already wrapped up the Race to Dubai, failed with the putt to encapsulate a day of missed opportunities.

He was just one-under-par on the four par-five holes on the Earth Course where his incredible power gives him such an advantage.

McIlroy also found the water off the tee at the last, but like on the seventh hole, recovered to make his par for a two-under round of 70.

It left him in a tie for second with England's Danny Willett and Richie Ramsay of Scotland at eight-under, two shots adrift of defending champion Henrik Stenson of Sweden, who followed a first round 68 with a fine 66.

"I just didn't quite have it," he admitted.

"I started to hit some better shots on the back nine and I'm happy where I am two behind with 36 holes to play," he added.

McIIlroy, playing his first tournament in six weeks, is bidding to end a triumphant season on a high note, having won two majors in 2014 and climbed back to the top of the rankings.

A first round 66 had left him in the joint lead with playing partner Shane Lowry of Ireland.

Lowry also had an eventful round, acing the par-three 13th but also missing several other birdie opportunities to finish in a five-strong group at seven under.

This also included England's Justin Rose, who carded a six-under 66, but like McIlroy could only make par on the final hole after finding the water with his opening drive.

The tournament, which brings together the top 60 on the money list, is the final event of the European Tour season with an $8 million prize purse on offer.