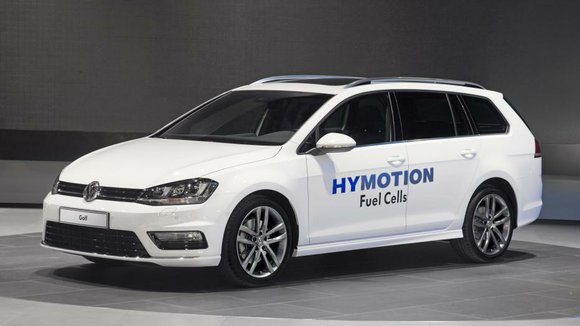 Volkswagen is staying mum on whether the HyMotion would see a limited release in the U.S.

Hydrogen fuel-cell cars are coming thick and fast this year at the Los Angeles Auto Show. We're only in day two, and there are already several cars featuring this alternative fuel technology.

Not to be upstaged by other automakers, corporate sibling Audi included, Volkswagen has debuted its own hydrogen fuel-cell concept car in the form of the Golf SportWagen HyMotion.

The HyMotion concept car is based on the Golf Variant, which makes use of the popular MQB platform underpinning Volkswagen's smaller cars. The HyMotion is powered by the cold-combustion process that takes place when hydrogen and oxygen are combined to form water. The HyMotion features four high-tech carbon-fiber tanks located in the underbody, giving the car a range of 310 miles between fill-ups, while offering similar interior space to a gasoline-powered Golf Variant. Volkswagen says the tanks can be replenished in approximately three minutes.

Volkswagen's approach to hydrogen fuel-cell technology is different from other manufacturers in that it strives to use as much existing engineering as possible, hence the HyMotion's use of the Golf Variant platform and the electric motor and transmission from the e-Golf, which is going on sale right now in the U.S. The electric motor and the coaxial two-stage one-speed transmission are located in the front of the engine compartment, with the MQB platform having been designed from the start to accomodate gas, diesel, electric and hydrogen fuel-cell powerplants with little modification. The engine compartment in the HyMotion concept also houses the cooling system, the stacks of the hydrogen fuel cell and a tri-port converter that regulates the voltage between the motor, the lithium-ion battery, the fuel cell and the turbo compressor. The high-voltage, lithium-ion battery lives close to the trunk, and battery power is converted from direct current (DC) into a three-phase alternating current (AC), which is channeled to the electric motor.

Volkswagen has also integrated a number of secondary zero-emission vehicle technologies into the HyMotion, such as regenerative braking that feeds a high-voltage, lithium-ion battery that can give the car a boost to maximize acceleration. Speaking of acceleration, Volkswagen says the HyMotion can get from 0 to 62 mph in 10 seconds flat and is rated at 136 hp.

The company is staying mum on the possibility of offering the HyMotion as a production car in the States, and by that we mostly mean California, where there is actually some infrastructure for hydrogen fuel-cell cars, primarily in the Los Angeles area. Volkswagen has also mentioned that it has a number of Passats with the same tech that are now being tested in the U.S., though plans to market any VW vehicle with a hydrogen powertrain remain somewhere between the drawing board and reality.