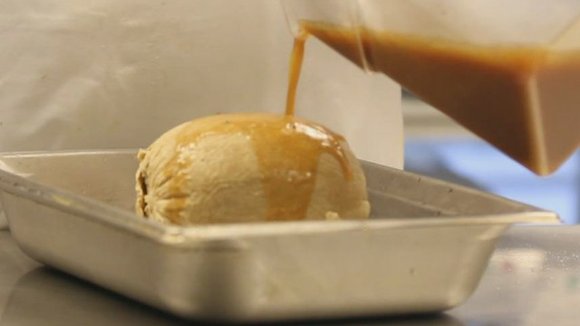 It may not be as healthy as a whole foods-based centerpiece, but come on -- it's Thanksgiving!

(CNN) -- Options for meat substitutes have come a long way since Seth Tibbott's first few Thanksgivings as vegetarian in the 1970s.

Vegetable side dishes and salads were nice but they didn't seem as festive as a turkey, the traditional centerpiece of the Thanksgiving table. The Oregon man tried all kinds of experiments, from a stuffed pumpkin to a gluten roast that took all day to make but was "unsliceable and indigestible."

After becoming a professional "soycrafter" in 1980, Tibbott noticed that sales seemed to slow around Thanksgiving and Christmas "as people lost their vegetarian ways and guiltily ate traditional fare like turkey," he said. Aside from tofu, which was primarily only sold in Asian markets, the only commercially available meat alternatives were made by Seventh Day Adventist companies, and many of these products were canned.

"I subsisted on a diet of homemade items like pressure-cooked soybeans and tortillas, soy grit burgers, bread and granola," he told CNN.

Over the years, fake meat -- or what some call plant-based meat -- grew to include burgers, hot dogs and ground beef. But poultry was still a relatively untapped niche, especially when it came to holiday centerpieces. With the help of Portland sandwich maker Hans Wrobel, Tibbott came up with the first Tofurky Roasts in 1995 and sold them in the Pacific Northwest.

Tofurkey has became a punchline on shows like Jay Leno and "The X-Files." In homes across the country, families have begrudgingly ceded a space on the table to vegetarian relatives. But Tibbott is laughing all the way to the bank as his fake turkey product enters its 20th season this Thanksgiving. The company says that more than 3.4 million Tofurky Roasts have been sold since 1995, and several competitors have emerged, creating more tasty bird-free roast options than ever for the holidays.

With its torpedo shape and spongy, loaf-like consistency, the Tofurkey and its competitors are a far gobble from a real bird. But add some stuffing and gravy and you have a comparable substitute for a Thanksgiving centerpiece.

"It's that traditional centerpiece, that protein source, that acts as the main dish. A roast brings that taste and texture of turkey that we associate with Thanksgiving," vegan food blogger Bianca Phillips said.

Flavor without the 'questions'

To eat meat substitutions or not is a perennial topic of debate among vegetarians and vegans, especially as mainstream demand for meatless options grows. Some meat substitutes contain processed ingredients, additives and preservatives, adding up to a fake hot dog that's not much healthier than a real hot dog.

Then there's the question of whether they defeat the point of avoiding meat. Does it send mixed messages about what vegetarians and vegans want? Aren't there enough delicious whole vegetarian foods without having to resort to meat substitutions?

On some level, plant-based meat defends the point of a meatless lifestyle, says vegan blogger and cookbook author Kathy Patalsky. Thanks to culinary progress, some meatless options are much more than soy protein, water and flavoring. Gardein, another popular maker of meat alternatives, uses wheat and pea proteins as well as ancient grains that include quinoa and kamut, Patalsky said in a 2010 blog post.