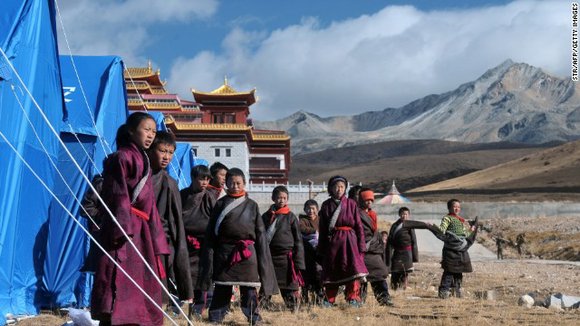 The China Earthquake Networks Center said it had measured the earthquake's strength at a higher magnitude of 6.3.

It injured more than 50 people and damaged around 25,000 houses, state media reported.

The magnitude-5.9 quake struck late Saturday afternoon in a mountainous area of Sichuan province at a depth of around 15 kilometers (9 miles), according to the U.S. Geological Survey.

The China Earthquake Networks Center said it had measured the earthquake's strength at a higher magnitude of 6.3.

The earthquake prompted students to flee from a primary school in the town of Tagong, near the epicenter, and 42 of them were injured in the ensuing rush, Xinhua said in an earlier report.

Video footage from the region showed panicked people dashing out of buildings as the quake struck.

The area has experienced scores of smaller aftershocks. Authorities say they have sent response teams and relief supplies to the affected region.

Seismic activity frequently affects Sichuan. A devastating earthquake that hit the province in 2008 left more than 87,000 people dead or missing.