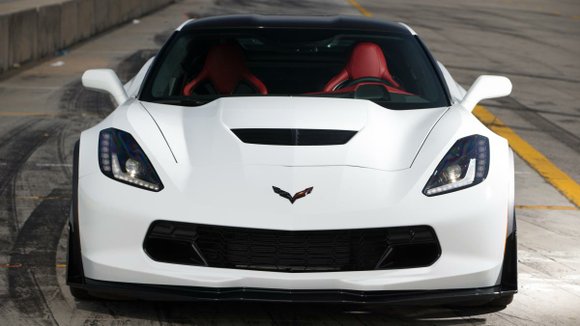 A unique hood and grille, as well as flared fenders, differentiate the Z06 from mere Stingrays.

NEW Z06 TAKES PERFORMANCE TO A STUNNING NEW LEVEL, ESPECIALLY ON THE TRACK

“I don’t see any cones … ” observes sports-car racing champion, Cadillac factory driver and Autoweek road-test ringer Andy Pilgrim, eying the Road Atlanta circuit as the SUV carrying us toward the paddock crests an access road. “This will be interesting.”

No cones mean no chicanes installed temporarily at the blistering 2.54-mile road course that rises and falls into a terrorizing bevy of quick, blind corners. “Interesting” is Pilgrim-speak, translated loosely, for, “Don’t be stupid when you get out there. Slow your hands down, and don’t get over your head. You don’t want to be that guy.”

At least, that’s what we hear as a realization manifests: The Corvette team is about to turn us loose, relatively unchecked, around this place in its new 2015 Z06.

A brief recap: The quickest series-production Corvette in history goes on sale in December with a new LT4 6.2-liter supercharged V8 producing 650 horsepower at 6,400 rpm, and 650-lb.-ft. of torque at 3,600. Chevrolet says the base version reaches 195 mph, and 186 mph when equipped with full aerodynamics (keep reading). Our own testing of a seven-speed manual gearbox model yielded 0-60 mph in 3.3 seconds, and the quarter mile in 11.5 seconds at 123.8 mph; Corvette engineers say an 8L90 eight-speed-automatic equipped car does 2.95 and 10.95, respectively.

Built on the same aluminum frame as the C7 Corvette Stingray, the 2015 Z06 is 20-percent stiffer than the C6 Z06, according to Chevy. This allows the coupe to come standard with a removable roof; a true convertible arrives in early 2015 and neither require additional chassis reinforcements to handle their increased performance beyond the Stingray.

One look at power, torque and acceleration numbers means the LT4 might be reason enough to place your order. Other than the block, it’s effectively an all-new engine, with different aluminum heads, titanium intake valves and forged aluminum pistons among the upgrades over the Stingray’s LT1. A 1.7-liter Eaton supercharger with shorter rotors spins up to 20,000 rpm, 5,000 more than the C6 ZR1’s supercharger. Power and torque delivery borders on devastating, as a loud, glorious exhaust note roars throughout the rev range on wide open throttle. There is almost no supercharger whine polluting the aural sensation either inside or outside the cockpit; you hear it only when listening hard for it, and even then only on partial throttle and not during hard driving.

Yet for all the Z06’s snorting on-paper capability, it rides and behaves on public roads as comfortably and docile as any new Corvette. Base Z06 spring rates within the standard, industry-leading magnetically adjustable suspension are just slightly higher than the Stingray’s, so ride quality remains excellent for an extreme performance car. Drive the Z06 plebeian-like on the street, even with the stiffer Z07 package (more on that shortly), and you might be hard-pressed to feel much difference between it and the standard car. Of course, this first drive occurred on reasonably well-maintained Georgia roads, so we'll wait to see how it fares as a daily driver for those who live with it on, for example, the battle-scarred routes snaking around its Detroit birthplace.

No need to even start the engine or resort to the spec sheet, however, to know immediately the Z06 is far from typical Corvette fare. It shares doors, roof and hatch with the Stingray, but fenders, quarter panels and carbon fiber hood are its own, as are the half-NACA/half ramjet quarter-panel snorkel ducts feeding air to the gearbox (left side) and differential (right side) coolers. Flared bodywork accommodates front Michelin tires 1.5 inches wider than the Stingray’s (P285/30ZR19); rear’s are 2.0 inches wider (P335/25ZR20). Front fenders extend outward 2.2-inches combined, rears 3.15.

There’s plenty of conspicuous aerodynamic addenda, too, and it soon becomes the day’s favored topic, causing more head shakes than even the pupil-dilating power. Pilgrim, who spent five seasons driving for Corvette Racing in the American Le Mans Series, quickly picks up on it at Road Atlanta.

“For instance, going down the hill in turn four, you’re rolling on a little more speed and when you turn in—it’s a downhill off-camber right-hander—you feel it’s getting some help,” he says. “You immediately realize this car, with the Z07 pack, has some downforce, you can feel it. And the additional damping [35 percent higher spring rate than a base Z06] works with it very well.”

By “some” Pilgrim means the most downforce, easily, either he or we have experienced in a stock road car. Though we’ve yet to run instrumented tests on new hypercars such as Porsche’s 918 Spyder or Ferrari’s LaFerrari, whether or not they can lap racetracks quicker than the Z06 is mostly irrelevant, as their million-dollar price tags, give or take, place them far outside the Corvette’s competition canon.

How much downforce you get is both somewhat unquantifiable and dependant on how you equip your Z06. Unquantifiable because, as Corvette chief engineer Tadge Juechter explains, “A lot of times [people] say a total vehicle has downforce, which typically really means downforce on the back but still lift at the front. We don’t like to say a pound figure; there are so many different ways to calculate and estimate that [by] extrapolating from wind-tunnel data, and every tunnel is different. … So if we put a number out there somebody would cherry pick it and then you start a war between manufacturers, and it turns into this technical debate how you’re measuring it.”

This explanation might sound convenient if not apocryphal. (Editor’s note: It’s certainly reasonable, however; see the ongoing absurdity surrounding manufacturers’ claimed Nürburgring lap times as Exhibit A when it comes to unchecked rules of engagement. Speaking of which, an official Z06 ’Ring time is not yet available.) But any doubt about the Z06 out-aeroing and out-lapping rivals like Porsche’s GT3, Ferrari’s 458, McLaren’s 12C and Nissan’s GT-R vanishes when you drive one—notably, one outfitted with the $7,995 Z07 pack.

Z06s start at $78,995, and feature a front splitter with small, bolt-on wickers, and a rear spoiler. Ticking the option box for the $3,995 carbon aero package adds a larger carbon-fiber front splitter with winglets, carbon side-rocker extensions, and larger rear spoiler with a fixed wickerbill. For ultimate grip, add Z07 to the carbon pack (required) and the car benefits from larger, removable front-splitter winglets, and larger, adjustable outboard wickers on the rear spoiler; it also boasts a removable, clear wicker bridge. In other words, there is a solid range of aero adjustability here, which some owners will undoubtedly make even broader by drilling their own holes for extreme spoiler attack-angles. Z07 also includes 15-inch Brembo carbon-ceramic brakes front and rear, and Michelin Pilot Sport Cup 2 ultra-performance rubber, rather than standard Pilot Super Sports.