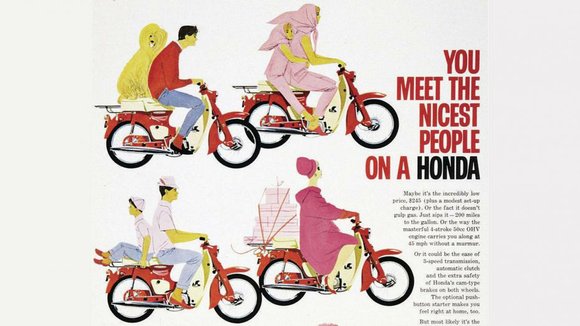 We can verify. You do meet the nicest people on a Honda.

Could Soichiro have imagined the 2015 Goldwing?

Honda has been the world's largest motorcycle manufacturer for decades, but it has just achieved a massive production milestone: Its 300 millionth bike, a 2015 Goldwing, has just rolled off the assembly line in Kumamoto, Japan.

The Goldwing is a luxurious tourer that Soichiro Honda probably couldn’t have even imagined when he founded the company bearing his name in 1946. An entrepreneur and trained auto mechanic, Honda lost one factory to Allied bombing during WWII and another to a 1945 earthquake; building and selling motorized bicycles powered by war-surplus generators got him back on his feet and led to the development of the Honda Type A.

The Honda Model D, or Dream, was the company's first purpose-built motorcycle. Photo by Honda

Honda’s first purpose-built motorcycle, the Model D (or “Dream”), was introduced in 1949. With its peanut tank and pressed-steel frame, the two-stroke, 98cc Model D looked like a strange hybrid of pre-WWII American and European bikes, though it copied neither breed directly. Since then, it’s produced everything from the quirky, collapsible Motocompo to the dead-reliable CB standard bikes. Along the way, Honda motorcycles entered -- and eventually began winning -- global motorcycle competitions.

The Cub F clip-on motorcycle power unit of 1952 helped mobilize postwar Japan and bolster Honda’s bottom line, but it was the Super Cub moped, which was introduced in 1958, that would eventually cement Honda’s reputation as a motorcycle manufacturing titan. By early 2014, cumulative global Cub series production numbers reached a staggering 87 million units. That’s enough to make it far and away the best-selling motorcycle of all time -- and enough to smash the Toyota Corolla’s record as best-selling motor vehicle model of all time.

The Honda Super Cub series is the best-selling motor vehicle of all time, with 87 million units sold as of early 2014. Photo by Honda

Honda is best known to today’s American consumers as an automobile manufacturer, but the company simply wouldn’t be where it is now if not for its truly groundbreaking two-wheeled offerings. Honda's earliest vehicles featured motorcycle-inspired chain-drives and the high-revving engines we still enjoy today.

While Western consumers are able to enjoy the relative luxury of Honda’s four-wheeled vehicles, its motorcycles and scooters give tens of millions of individuals in developing nations the option of mobility every year. But even if you don’t need to ride a two-wheeler out of necessity, you might want to give it a try anyway -- you know what they say about the kind of people you meet on a Honda.