At least 40 fighters killed in Syrian city of Kobani 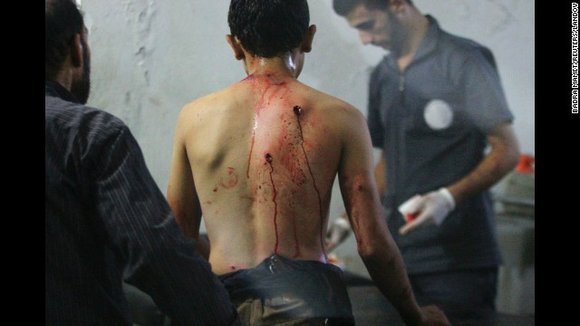 YPG fighters also carried out several operations in the neighborhood of Botan Sharqi on the southern outskirts of Mashtah Nour hill near Kobani, the monitoring group reported.

(CNN) -- At least 40 fighters on both sides were killed as Syrian Kurdish fighters and ISIS militants clashed in the northern Syrian city of Kobani, a monitoring group said Saturday.

Kurdish fighters belonging to the People's Protection Units, known as YPG, have been locked in a death struggle with ISIS fighters for the border city, in the shadow of Turkey, with 100,000 desperate Syrian Kurds fleeing to Turkish territory.

Five ISIS suicide bombers blew themselves up using cars and explosive belts near the besieged Kurdish city, according to the London-based opposition group, Syrian Observatory for Human Rights.

Clashes also erupted west of Kobani, with ISIS using tanks to advance and firing at least 110 shells on various areas of the city, the monitoring group said Saturday.

At least 10 YPG fighters and 25 ISIS militants were killed during the clashes, according to the SOHR.

YPG fighters also carried out several operations in the neighborhood of Botan Sharqi on the southern outskirts of Mashtah Nour hill near Kobani, the monitoring group reported.

The U.S.-led coalition, meanwhile, conducted five airstrikes in Kobani, including one against an ISIS tank west of the city, the SOHR said.

The coalition started operations in September.

ISIS, the Sunni Muslim extremist militant group, has been fighting to take Kobani for more than two months, hoping to add it to the territory it has already captured in parts of Syria and Iraq for what it calls its new independent Islamic nation.

Syria has been embroiled in a three-year civil war, with government troops battling ISIS and other rebels elsewhere, leaving Kobani's ethnic Kurds to defend the city. Airstrikes by the U.S. and its allies, part of a larger U.S.-led coalition effort against ISIS in the region, intermittently take out ISIS targets in the area.

The Syrian Kurdish fighters, part of the People's Protection Units,, have ties to the Kurdistan Workers' Party, or PKK, which has fought a 30-year guerrilla war against the government of Turkey, where about 20% of the population is Kurdish.

Turkey, the European Union and the United States consider the PKK a terrorist organization.