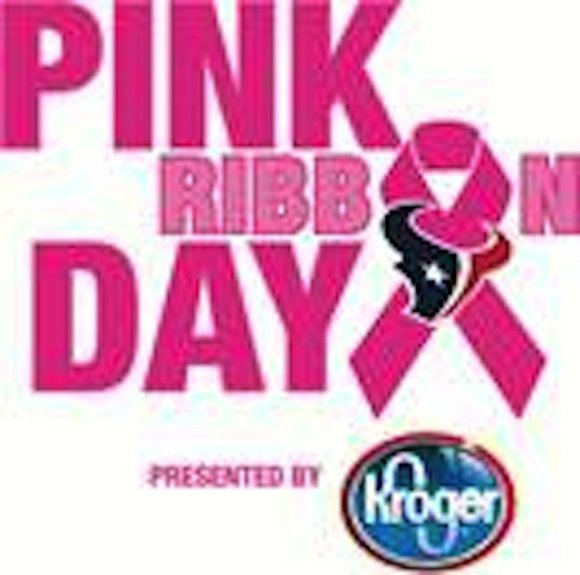 HOUSTON – October is national Breast Cancer Awareness Month, and the Houston Texans and the National Football League are once again doing their part to promote the cause through the League’s month-long A Crucial Catch campaign. In what has become an NFL tradition, players and coaches across the League will wear pink shoes, gloves and apparel in games throughout the month to show their support. All pink game-worn items will be auctioned off at nflauction.nfl.com with proceeds benefiting the American Cancer Society.

The theme for Sunday’s game against Indianapolis is Pink Ribbon Day presented by Kroger. Fans are encouraged at arrive to their seats early to help the Texans turn the stadium pink for a full-stadium card stunt taking place at kickoff.

Prior to kickoff, Texans offensive tackle David Quessenberry will serve as the Homefield Advantage Captain. Quessenberry is currently undergoing chemotherapy to battle lymphoma and will lead the team out of the tunnel during player introductions. Janice McNair, the “First Lady of the Texans,” will serve as the team’s Coin Toss Captain. Mrs. McNair is also a breast cancer survivor.

Thirty-five members of the Houston Horizon Chorus will perform the national anthem. Twenty-five fans and three guests each were selected from the Enter to Win Pink Ribbon Day Contest after submitting an entry on how they have been personally affected by cancer and will hold the Texas flag during pregame festivities. Grammy Award nominated Eli Young Band will perform three of their hits live at halftime.

The Houston Texans Foundation will show its support by donating all of the proceeds from the sales at the Oct. 9 Game Day Auction to the capital campaign for the American Cancer Society’s Hope Lodge, a facility that will offer free accommodations and transportation to cancer patients receiving treatment in the Texas Medical Center. Auction items will include one-of-a-kind player-autographed memorabilia.

On Oct.1, Texans Cheerleaders, Kroger and Houston Methodist teamed up to reward six breast cancer survivors with the ultimate shopping spree in a local Kroger. The Texans are also strong supporters of the annual Susan G. Komen Race for the Cure, which took place Saturday, Oct. 4. More than 200 Texans fans and members of the Texans organization participated in the race, including Texans Cheerleaders, staff and members of the Lady Texans – the wives of Texans players, coaches and executives. Texans cornerback Kareem Jackson surprised a breast cancer survivor at work with a Houston Texans experience including tickets to attend Thursday’s game with her 7-year old son.